What are California’s ‘Pro-Choice’ Abortion Laws?

May 10, 2022 by Alexandra Carter in California  Rights 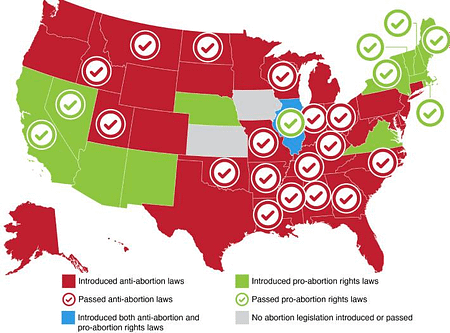 In the wake of a recent leaked Supreme Court memo that showed SCOTUS’ vote to overturn abortion laws, California has announced plans to become a sanctuary for women in states that have banned abortion — even proposing to use state funds to cover their travel costs.

California has a long history of having far stronger abortion and women’s health rights than other parts of the country.

So, what exactly are the abortion laws in The Golden State?

An abortion is a procedure that is performed to end a pregnancy. Abortions are sometimes referred to as pregnancy terminations. The abortion happens through medications or a surgical procedure.

In 2002, California’s state legislature passed a law that stated:

“The state may not deny or interfere with a woman’s right to choose or obtain an abortion prior to viability of the fetus, or when the abortion is necessary to protect the life or health of the woman.”

Are there Limitations on Abortion in California?

California abortion laws grant women a fundamental right to terminate their pregnancies. However, there are some limitations.

The right to an abortion is absolute in California in two cases:

Generally, most fetuses are considered “viable” when they reach the 23rd week of pregnancy or when they weigh at least 500 grams.

Once the fetus becomes viable, meaning if it were to be born at that moment, it would have a reasonable chance of survival, abortion rights become more limited, and abortion is only legal when medically necessary for the life or health of the mom.

Another limitation under California law is that only qualified medical professionals can perform abortions, whether the fetus is viable or not.

How Will the Overturning of Roe v. Wade impact California Abortion Rights?

In light of the recent SCOTUS leak, it is likely that the Supreme Court will overturn Roe v. Wade, which recognized women’s constitutional rights to abortion. However, the good news is that this overturning should not impact women’s rights to abortion care in California because, unlike in many other states, California does not have a trigger law that bans abortion if Roe v. Wade is overturned.

Since many other states have these trigger laws or may already outlaw abortion, California is expecting an influx of out-of-state women seeking abortions in The Golden State and other states where abortion care will remain legal. This will likely increase wait times to seek abortion care in those states.

How Late Can You Have an Abortion in California?

California does not have a strict cut-off date for when abortions may be performed. But, absent special circumstances and medical issues, abortions cannot be performed once a fetus becomes viable — if it’s likely to survive at that time outside of the uterus. It must be able to survive without extraordinary medical intervention. Each doctor determines whether a fetus is viable on a case-by-case basis.

Generally, most fetuses are considered viable when they reach the 23rd week of pregnancy or when they weigh at least 500 grams.

Is There an Age Requirement to Get an Abortion?

Underage women have the same right to an abortion as adult women do. The only stipulation is that women under the age of 18 seeking an abortion must have parental consent.

Who Can Legally Perform Abortions?

Not all medical professionals are authorized to perform surgical abortions in California. They must possess a valid medical license that has not been suspended or revoked.

There is a wider range of medical professionals who are authorized to perform medication abortions, including:

Medication abortions need to happen early on in the pregnancy and must be performed in the first trimester.

It is illegal for an employer to require medical professionals to perform abortions, and doctors can’t be penalized for refusing to perform the procedure. Healthcare facilities can also refuse to offer abortion care without facing any legal repercussions.

We understand that the SCOTUS news was jarring — and even devastating — for women everywhere. Whether you are a California resident or not, if you have any questions about California abortion law and/or traveling to California from out-of-state to seek abortion services, our team can help.