Can Verbal or Emotional Abuse Lead to Domestic Violence? 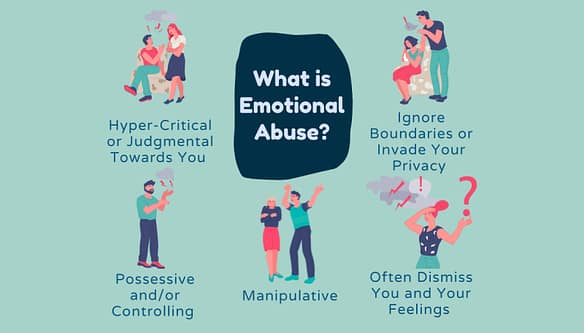 Recognizing the Signs Before It’s Too Late

Domestic violence is a problem that can have far-reaching effects on the lives of those involved. It’s important to recognize that domestic violence can include many behaviors besides striking your partner.

Abusive relationships are largely based on control. The abuser uses verbal, emotional, and physical coercion to maintain control over their partner.

So the short answer to the question, “Can verbal or emotional abuse lead to domestic violence?”.. is yes.

If you have experienced any of these behaviors, you may be in an abusive relationship. You should consider speaking to someone and developing a plan for dealing with it.

In PC 273.5, California criminalizes any intentional act that causes a bodily injury, even a minor one, to a spouse, domestic partner, or dating partner. This law deliberately uses the phrase “corporal injury” to exclude mental and emotional injuries. As such, prosecutors cannot use this law when the only abuse is verbal or emotional.

How Can Verbal or Emotional Abuse Lead to Domestic Violence Charges?

Yelling does not constitute a crime in California. But any contact, even incidental contact, could be considered domestic battery.

One specific type of verbal abuse is prohibited by California PC 422. This statute prohibits anyone from making criminal threats to another person. These threats can happen in person, in writing, or electronically.

The message must threaten a crime that will result in death or great bodily injury. And you must make a credible and specific threat. Trash talk would not be enough.

Even though you cannot get arrested for yelling, a judge can issue a restraining order against you for verbal or emotional abuse. If you violate that order, you could get arrested.

An argument between you and your partner could result in an arrest, but not because of anything you did. Instead, you could get arrested for what your partner said you did.
If you have witnesses and physical evidence to support your story, you might persuade a prosecutor to drop the charges or convince a jury to acquit you.

But after a brush with a domestic violence charge, you should reexamine your life. Even if you “only” yelled at each other, yelling will not sustain a long-term relationship.

Dealing with Domestic Violence Charges for Verbal or Emotional Abuse

Prosecutors may worry that verbal and emotional abuse will escalate to physical violence. They might proactively file charges for a confrontation that did not result in an injury by focusing on threats or contact during the fight.

Sometimes you can beat these charges because California has no law against emotional or verbal abuse. But these cases can provide a wake-up call to better understand yourself and your relationships.

Accused of a Domestic Violence Crime?

You need an experienced domestic violence lawyer to fight for your freedom and your rights.