How Does Credit/Debit Card Skimming Work? 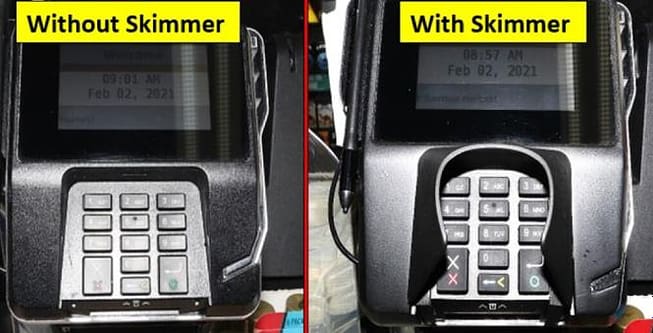 Beware of Skimmers, Use Credit not Debit

Anyone making purchases or withdrawing cash from an ATM, buying petrol, or eating out might be a victim of card skimming. Installing a skimmer on your card reader will allow criminals to steal your credit card information. Credit card skimmers are used by criminals to acquire payment card details. They may be found in card readers and are used to record your data secretly. Later, they’ll get their hands on this data and utilize it to make fraudulent transactions.

Before inserting or swiping a card, a short visual or tactile check may generally reveal a skimming device. While ATMs and gas stations are the most common locations for skimming devices, businesses in other industries, including shops and restaurants, are not immune to this fraud. A hidden camera may occasionally record the process of inputting a PIN into an ATM. Putting a fake keypad over a simple ATM keypad is another standard method of stealing PINs. Thieves often design their skimmers, and associated technologies seem like or feel like legitimate credit card readers, making them difficult to detect.

Theft of a credit or debit card, or the information associated with such a card, is a felony under Section 484e of the Penal Code (PC). The maximum term for this crime is three years in prison, depending on whether it is prosecuted as a misdemeanor or a felony. This part of the code is only one of numerous California statutes dealing with credit card fraud.

Is There Any Way to Tell If Someone Is Using Your Credit Card?

Skimming devices for credit cards may be difficult to detect since they resemble legitimate card readers. However, if you are keen, you should be able to spot the fake readers that are just out to steal your data. Card readers equipped with skimming devices may make some people uncomfortable. For instance, if the card reader at a particular petrol pump is noticeably more prominent than those at other pumps in the area, you may have stumbled into a skimmer. If you give it a little jiggle, the reader may be equipped with a skimmer.

Card skimming devices are not limited to ATMs and petrol stations; they may also be found at ticket kiosks and parking meters. When you remove your card from view, an employee with a portable skimmer might potentially take your card information.

What exactly is the punishment?

When the worth of the stolen goods is $950 or less, the offense is considered “petty theft.” The typical cutoff point for labeling a theft as “grand theft” is a $950 value. A misdemeanor conviction for significant theft might lead to the following consequences:

A harsher sentence may be imposed if the crime is classified as a felony. The possible outcomes of a conviction include:

What Ensues When a Credit Card Is Skimmed?

If a burglar obtains your credit card details, they may use them to create counterfeit cards, conduct fraudulent online transactions, or sell the data on the dark web. Unlike fraudulent debit card charges, credit card charges may be contested more easily. In many cases, the amount of the fraudulent charge will be reversed and credited back to the cardholder’s account, as shown on subsequent billing statements. In the event of fraud, the cardholder often bears no financial obligation to the card issuer because of the zero liability provision of many credit cards.

Use a credit card and not a debit card when making purchases at a petrol station to take advantage of this additional security measure. You may also pay the cashier at the gas station’s entrance, where the point-of-sale system is less likely to have been compromised. Follow up on your credit card bills or log in to your account online regularly to keep tabs on your spending. Please contact the number on the back of your card immediately if you suspect any unusual behavior.