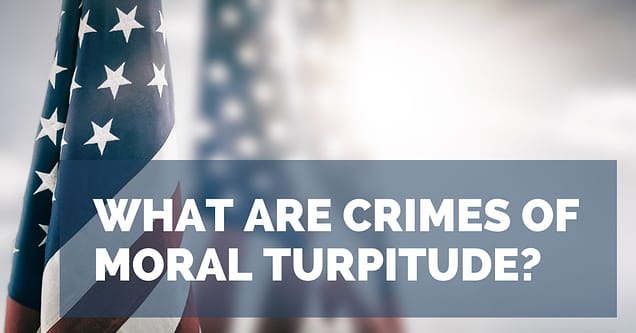 I asked a friend to tell me what came to mind when he heard the phrase “Crime of Moral Turpitude.” He replied,

“An act that violates acceptable moral standards.  It describes the vileness of a crime or, perhaps, depravity: He [the hypothetical murderer] did not just kill his victims, but in an act of total moral turpitude, he dismembered them, marinated the various body parts, and then sold them at his roadside barbecue.”

“Conduct that is contrary to justice, honesty, or morality; esp., an act that demonstrates depravity.”

In the area of legal ethics, offenses involving moral turpitude—such as fraud or breach of trust—traditionally make a person unfit to practice law.—Also termed moral depravity.

In the entertainment industry, contractual morality clauses have been in effect since silent film star Fatty Arbuckle was accused of rape and murder a hundred years ago. Now, due to #MeToo and Cancel Culture, the use of morality clauses to void contracts with alleged moral offenders like Roseanne Barr, Louis C.K., and Kevin Spacey is on the rise.

There are no specific statutes defining “moral turpitude” and according to the California Supreme Court, the term “is an elusive concept incapable of precise definition.” Although the Moral Turpitude Void-for-Vagueness debate has raged for many decades, the idea of moral turpitude has not been congressionally contested and remains a significant factor in legal decision-making.

Crimes Involving Moral Turpitude [CIMTs] can be crimes against property, against the government, or against other people. Usually, for something to be considered a CIMT, it must involve intent, taking deliberate action with the knowledge that the action poses a serious risk of harm to others. If one intentionally does something to harm another person, it will probably be considered a CIMT. Whether or not a crime is a CIMT has to do with a determination of intention.

For example: A first-time DUI is not a CIMT, but a DUI while driving with an already suspended license is.

In 1998, President Clinton was accused of committing Perjury and Obstruction of Justice, both classified as CIMTs, in reference to the investigation of his relationship with White House intern Monica Lewinsky.

Last week the Wall Street Journal reported that 131 federal judges had failed to recuse themselves from 685 cases in which they had active financial interests. Clearly, if found to be intentional, these judges’ behavior could be considered CIMTs.

The terminology “Crime Involving Moral Turpitude” entered federal immigration law in 1891. The Act of 1891 expanded already existing categories of aliens (including all Chinese laborers) to be deemed inadmissible for entry to include, “[a]ll idiots, insane persons, paupers or persons likely to become a public charge, persons suffering from a loathsome or a dangerous contagious disease, persons who have been convicted of a felony or other infamous crime or misdemeanor involving moral turpitude, polygamists, and also any persons whose ticket or passage is paid for with the money of another or who is assisted by others to come.”

The “moral turpitude” provision was reenacted in 1903, 1907, 1952, and 1996. The 1952 Act called for the deportation of any immigrant who committed a CIMT within five years of admission to the United States when the alien/convict was sentenced to at least one year in prison. The 1996 Act made a CIMT grounds for deportation as long as a crime was punishable by a year in prison, whether or not the alien/convict had been sentenced to any prison time.

In 2016, California Governor Jerry Brown signed Senate Bill 1242 into law that made a misdemeanor eligible for not more than 364 days of incarceration, whereas a felony would be 365 days or more. Significantly, this law also applies retroactively and gives people who were convicted of CIMT eligible crimes before 2015 the ability to now apply for sentence modifications.

This is why it’s so important to have an experienced attorney analyze your case and explain your options before you plead guilty or accept a diversion deal. Even if you or your loved one doesn’t serve any time, being convicted of a crime that could be perceived to be a CIMT will likely cause problems down the line.

“Crimes of Moral Turpitude” include (but are not limited to): 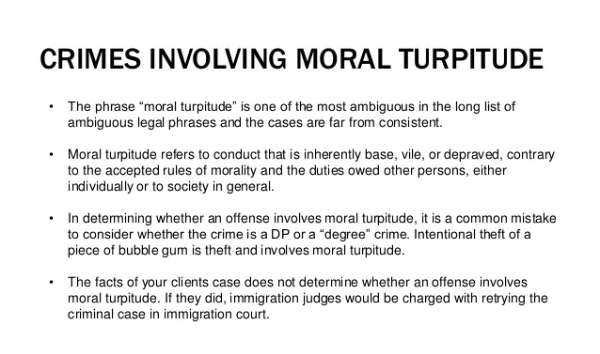