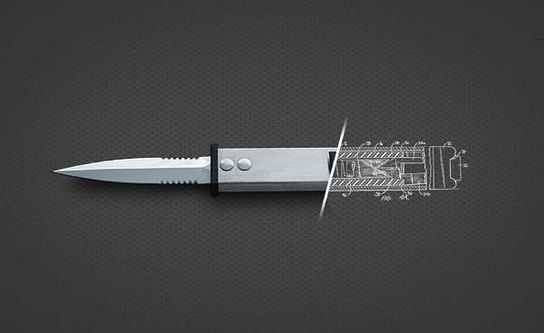 Carrying a concealed weapon is a dangerous and illicit proposition, which can lead to serious consequences. Carrying a “dirk” or “dagger,” for instance, is unlawful under Penal Code Section 21310. The statute itself reads,

“any person in this state who carries concealed upon the person any dirk or dagger is punishable by imprisonment in a county jail not exceeding one year or imprisonment.”

It is necessar­y to delve into California statutory history in order to better understand this provision.

For example, dagger is defined under Penal Code Section 16470 as:

Under the Penal Code, a pocket knife (considered a non-locking folding knife) is legal to possess and carry so long as it remains in its folded position.

A pocket knife is considered a stabbing weapon capable of inflicting great bodily injury or death only if:

Furthermore, Penal Code Section 20200 allows an individual to openly carry straight knives and folding knives that are opened and locked provided that they are:

Therefore, it is legal to carry a folding pocket knife or utility knife concealed upon your person so long as it is closed or if the blade cannot be locked. However, under California law, a concealed dirk or dagger is considered a “generally prohibited weapon,” within the meaning of Penal Code Section 16590(i).

Penal Code Section 21310 is considered a wobbler crime. This means that carrying a concealed dirk or dagger may be charged as a felony or as a misdemeanor. If charged as a felony, a defendant could be sentenced to up to three years incarceration. If charged as a misdemeanor, a defendant could face up to one year in the county jail. A felony conviction of Penal Code Section 21310 is also punishable by a maximum $10,000 fine.

A misdemeanor conviction is punishable by a fine of no more than $1,000.

Nonetheless, a probation sentence—in lieu of a jail term—is common for many generally prohibited weapons violations, including charges for carrying a concealed dirk or dagger. Probation is a period of supervision instead of serving time in prison. Often, the court will require some conditions to be met, such as participation in a work release program or community service.

If a defendant is not granted probation, a suspended or split jail sentence may be available for a felony conviction under Penal Code Section 21310.

A split jail sentence is a sentence that is served partially in jail and partially out of jail on a work release or house arrest program.

Additional penalties and punishments for carrying a concealed dirk or digger include: fines, professional licensing consequences, victim restitution, loss of the right to own or possess a firearm, and more.

To convict under Penal Code Section 21310, the District Attorney must establish the four elements of the crime:

The term “capable of ready use” means that the knife is in a position that does not require assembly before it can be employed. For example, as discussed above, a pocket knife is not a dirk or dagger unless the blade of the knife is exposed and locked into position.

The term “concealed” means that the dirk or dagger is substantially concealed and the defendant is not openly identifiable as having possession of a weapon (i.e., a knife carried in a sheath and worn openly suspended from the waist of the wearer is not a concealed weapon).

The term “great bodily injury” means serious or substantial physical injury that is greater than insignificant, minor or moderate harm.

Also note that the fourth element above is a question of fact. Therefore, a judge or jury will decide it based on all of the facts of a case.

There are several defenses to Penal Code Section 21310, including but not limited to:

If a defendant did not knowingly possess or carry a stabbing weapon capable of inflicting serious bodily injury or death, he or she can validly use the same as a well-established defense to any charges brought forth. Being in possession knowingly is key. For instance, a defendant has a legitimate defense to a Penal Code Section 21310 violation if he or she were perhaps given someone else’s property to hold, unaware that a dirk or dagger was concealed within this property.

Moreover, if a dirk or dagger is not concealed, if it is worn in a sheath on the defendant’s waist, or if it does not fall under the definition of a dirk or dagger, a defendant would not be guilty of violating any offense.

For example, the police are prohibited from searching a person, their vehicle or their property unless:

If the officer(s) cannot prove its legally, a search may be found to have violated a defendant’s Fourth Amendment Constitutional rights. And if the search is deemed illegal, even if a dirk or dagger is discovered, it is inadmissible in court and thus no Penal Code violation can be applied.

Carrying a concealed dirk or dagger is a wobbler offense that can be charged as a felony or misdemeanor—depending on the circumstances surrounding the crime, the defendant’s criminal history, and more.

If you have been charged with a Penal Code Section 21310 violation, it is important that you meet with a Los Angeles criminal defense attorney immediately to obtain the lowest sentence possible. Being accused of a crime involving a generally prohibited weapon can lead to serious consequences for those convicted.

Working with a skilled attorney will help your case tremendously.

The ideal attorney can research and apply the right defenses to your particular case. Furthermore, a knowledgeable criminal defense attorney can prove probable cause was not present or uncover police misconduct, protecting your constitutional rights where necessary.

If you or someone you know have been accused of a crime involving a concealed dirk or dagger, it is critical that you meet with an experienced criminal defense attorney as soon as possible.