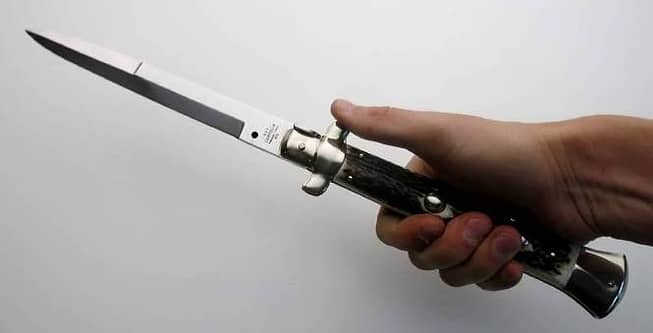 Carrying a Switchblade – Table of Contents

How is carrying a switchblade defined under PC 21510?

It is unlawful for a person to have in their possession a knife with a blade more than two inches that is defined as a switchblade, while in public, in their car on the passenger or driver seat of the car; or sells, offers to sell, or exposes for sale or loan, or transfers to another.

To be clear what is the definition of a switchblade under PC 21510?

A knife having the appearance of a pocketknife and includes a spring-blade knife, snap-blade knife, gravity knife, or any other similar type of knife were the blade or blades of are two or more inches in length and which can be released automatically by a flick of a button, pressure on the handle, flip of the wrist or other mechanical device, or is released by the weight of the blade or by any type of mechanism whatsoever. “Switchblade knife” does not include a knife that opens with one hand utilizing thumb pressure applied solely to the blade of the knife or a thumb stud attached to the blade, provided that the knife has a detent or other mechanism that provides resistance that must be overcome in opening the blade, or that biases the blade back toward its closed position.

What is the definition of possession under Penal Code 21510 PC?

The general meaning of possession under Penal code 21510 PC is active control. The contract itself must notify others that a knife is to be used causing immediate danger, or fear of danger to another. The knife must be within the driver’s reach, transferred possession applies meaning the knife can be in another person’s reach in the same car, but under the instruction or permission of the driver, illustrating control of the instrument.

Is there a mental state required for a violation of Penal Code 21510 PC?

There is the mental state of knowledge. Knowledge means the carrier must intend unlawful circumstances by having within the person’s reach an instrument that another can infer serious bodily injury from the design and purpose of the instrument. Therefore, if a person intends the public or those around him in a car, in person, or in a group exhibits a switchblade in a matter desiring a result of serious bodily injury under the right circumstances and others observing this implied conduct infer the same, then the element of possession is met.

What is the definition of “open to the public, or open to public view” for PC 21510 to apply?

What are the particulars of selling, loaning, or transferring as a violation of PC 12510?

Any transfer, loan, or sell of a switchblade is regarded as a commerce act in The State of California. This is so because the original owner or current owner of a switchblade would like their first option to be a business where the entity is licensed to sell, pawn, store, and handle weapons.vi Otherwise, the seller would have to transact with a private party and risk of a crime taking place.vii Commercial businesses must account for all weapon trades, especially guns, with the seller’s driver’s license and transmit that data to the California Department of Justice. Most vendors will not want to disrupt their revenue stream of guns and ammunitions and will run strict guidelines on switchblade sales. If a switchblade is discovered it will be confiscated by the vendor and reported to the police, if not they risk the chance of losing their commercial license.

What are the penalties for a violation of Penal Code 12510 PC?

A violation of Penal Code 12510 PC is a misdemeanor, punishable up to 6 months in jail, with fines not exceeding $1000 dollars.

What are examples of violations of Penal Code 12510 PC?

What are the defenses to a violation of Penal Code 12510 PC?

Accused of Carrying a Switchblade? – Hire Us