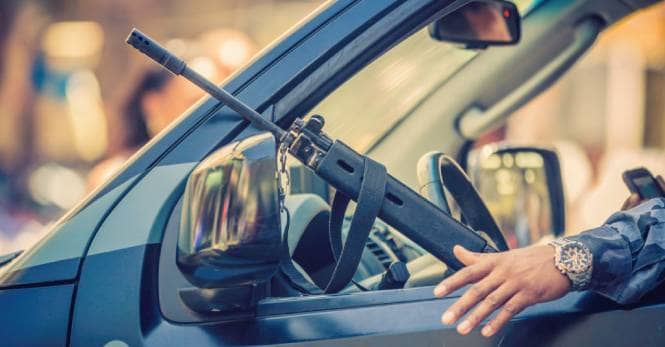 Discharging a Firearm From a Vehicle – Table of Contents

The provision itself reads:

(d) Except as provided in Section 3002 of the Fish and Game Code, any person who willfully and maliciously discharges a firearm from a motor vehicle is guilty of a public offense punishable by imprisonment in the county jail…

This breaks down to mean California makes it a crime for:

Under this statute, a person acts “willfully” when he or she engages in an act willingly or on purpose. Furthermore, a person acts “maliciously” if he or she knowingly commits a wrongful act and/or acts with the objective of injuring another. A “motor vehicle” for purposes of this statute ranges and can include any of the following:

Examples of violating Penal Code Section 26100 include permitting a family member to bring a gun into your car, discharging a pistol while driving a friend’s truck, or shooting at another vehicle from the back of a bus.

Penal Code Section 26100 is considered a wobbler crime. This means that discharging a weapon from within a vehicle may be charged as a felony or as a misdemeanor.

If charged as a felony, a defendant could be sentenced for a period of three, five or seven years incarceration.

If charged as a misdemeanor, a defendant could face imprisonment of up to one year in the county jail or between 16-months to three years in state prison.

Nonetheless, a probation sentence—in lieu of incarceration—could be a sentencing alternative depending on the criminal history of the defendant and circumstances of the present offense. Probation is a period of supervision instead of serving time in prison. Often, the court will require some conditions to be met, such as participation in a work release program or community service.

If a defendant is not granted probation, a suspended or split jail sentence may be available for a felony conviction under Penal Code Section 26100.

A split jail sentence is a sentence that is served partially in jail and partially out of jail on a work release or house arrest program.

Additional penalties and punishments for discharging a weapon from a motor vehicle or knowingly allowing another to do so include: fines, professional licensing consequences, victim restitution, loss of the right to own or possess a firearm, and more.

To convict under Penal Code Section 26100, the District Attorney must establish one of the four criteria of the crime, i.e. that:

The issues that most often arise are whether the prosecutor can prove the individual accused acted “willfully and maliciously,” and/or whether the person was indeed within a motor vehicle for purposes of the statute. Note: it is not required that the prosecution prove the vehicle was actually in motion at the time of the offense to convict an individual of a “drive-by shooting” under Penal Code Section 26100.

The prosecution must simply prove the defendant was in a motor vehicle at the time he or she intentionally and knowingly fired a gun, or allowed another person to do the same.

A defendant has the right to contest a charge of shooting from a motor vehicle in California by asserting a valid legal defense. The most common defenses to Penal Code Section 26100 include:

If a defendant did not knowingly permit another to enter his or her vehicle with a firearm, he or she can use the same as a well-established defense to any charges brought forth. Knowledge is key here. For instance, a defendant has a legitimate defense to a Penal Code Section 26100 violation if he or she were perhaps giving a colleague a ride home from work, unaware that a gun was concealed on said colleague—until the defendant stopped the car at a red light and the passenger fired at a pedestrian.

Moreover, an accused is only guilty under this statute if he or she acted willfully and maliciously. It is a valid defense, therefore, for a defendant to prove that he or she did not act with the requisite intent. For instance, a sound defense would be to show that the gun fired on accident.

Furthermore, if the defendant accused of shooting from a motor vehicle can evidence that he or she only fired out of a genuine and reasonable fear for his or her own safety, or for the safety of another person, that defendant has a well-grounded claim of self-defense. This defense is appropriate if the defendant truly believed that he or she was in imminent danger, believed that the force applied was necessary to stop the danger, and used an objectively appropriate level of force in defense.

And as noted above, if a vehicle driver or owner had no knowledge that his or her passenger was armed with a gun, he or she cannot be considered guilty of a “drive-by shooting” offense. In addition, however, it may be possible that a driver or owner only allowed a passenger to fire a gun from within the vehicle because he or she feared or was threatened by the passenger. If this is the case, a defendant has the right to present a duress defense claim as well.

“Drive-by shooting” is a wobbler offense that can be charged as a felony or misdemeanor—depending on the circumstances surrounding the crime, the defendant’s criminal history, and more.

If you have been charged with a Penal Code Section 26100 violation, it is important that you meet with a Los Angeles criminal defense attorney immediately to obtain the lowest sentence possible. Being accused of a crime involving discharging a weapon from a motor vehicle can lead to serious consequences for those convicted.

Working with a skilled attorney will help your case tremendously. The ideal attorney can research and apply the right defenses to your particular case. Furthermore, a knowledgeable criminal defense attorney can prove you did not have the requisite intent to be convicted. If you or someone you know have been accused of a crime involving a shooting from a motor vehicle, it is critical that you meet with an experienced criminal defense attorney as soon as possible.

If you or someone you know have been accused of a crime, it is critical that you meet with an experienced criminal defense attorney as soon as possible.