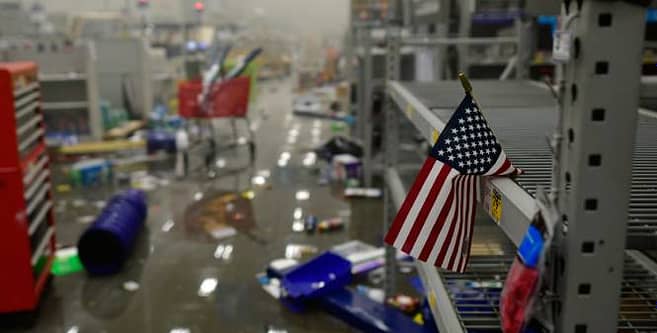 A state of emergency is filled with anxiety and uncertainty. Hence some people may decide to take advantage of this situation to commit certain acts of theft. These actions can result in someone being charged for looting in California under the California Penal Code Section 463 PC.

California Penal Code 463 counts looting as committing specific thefts during a local or state emergency. These acts of theft include:

A state or local emergency refers to an events or series of events that are so extreme they are beyond the control of a single city or country. A state of emergency can only be declared and terminated by the state’s governor. A local emergency on the other hand is declared and terminated by a governing body of a city or county. These two are usually declared following natural or man-made disasters such as earthquakes, riots, fires, floods, wildfires, hurricanes or blizzards.

If you happen to be convicted for looting in California, the penalties you face will depend on the seriousness of the crime.

If you are convicted for looting by petty theft. This is a misdemeanor offense that will carry the following penalties:

If convicted for a felony the penalties include:

You should note that if you are convicted for looting involving grand theft of a firearm. This will automatically be classified as a felony.

To ensure you charges are dropped, reduced or dismissed, there are a couple of defense strategies that a defense attorney can use to argue your case. They include:

For the defendant to be convicted for looting involving burglary they need to have entered a building with the intent to commit larceny. However there may be other reasons that may force an individual to enter a dwelling for example, an individual entering a warehouse to escape floods. In a situation like this, your attorney can argue that while you entered the dwelling, you did not do that with the intent to commit theft.

A state of emergency is a time when tensions are high. There are likely more looting cases going on than normal. Furthermore, police officers are usually overworked trying to get a handle on everything that is going on. Therefore it can happen that an officer mistakenly arrests someone in a riot or protest for looting charges committed by someone else.

Therefore if the defendant is able to prove they were not the one who did the looting they can get their charges dropped.

Acted Out of Necessity

If the defendant looted as a last alternative out of basic necessity. They may be able to get their charges dropped. State emergencies can make basic needs scarce causing people to make moves they never would before.

Thus if you, or a loved have been charged under the California Penal Code 463 PC. Attorney Seppi Esfandi is a dedicated lawyer that will aggressively defend you. He will do everything possible to ensure you get the best case scenario from your trial case.