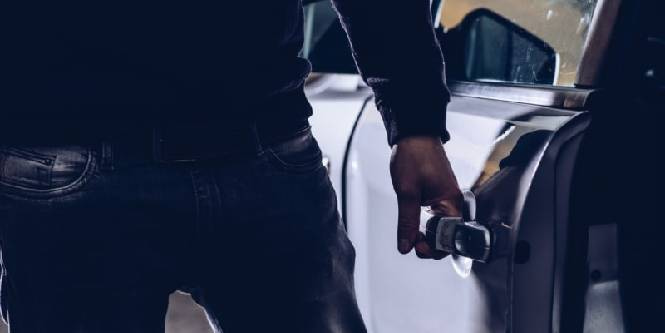 Grand theft auto is more than just a game. In fact, it is considered a serious crime in California. Grand theft auto, or GTA as it is sometimes called, is described under the California Penal Code Section 487(d)(1) PC.

This statute makes it illegal for an individual to take someone else’s vehicle worth $950 or more without the vehicle owner’s consent with the intention to permanently deprive the owner of their automobile.

The most common way for people to commit grand theft auto is usually a theft by larceny, where someone simply takes a motor vehicle without consent.

Nonetheless, there are other ways for a person to be in violation of the Penal Code 487(d)(1) PC. A person can commit grand theft auto if they steal a car:

If convicted for a misdemeanor, the penalty involves incarceration of one year in county jail.

If convicted for a felony, the defendant could be sentenced to a jail sentence of up to three years in jail. You should note that there may be an additional charge for the grand theft auto of high-value cars.
If the car was valued at $65,000 or more, the defendant will get an additional year in jail.

However, if the car was valued at$200,000 or more. Then the defendant will get two additional years in incarceration.

A great way to have an edge in your case, if you are in violation of the Penal Code 487(d)(1) PC, is to understand, which strategies the prosecutor will use against you. For the prosecutor to have you convicted for grand theft auto, they have to prove without a reasonable doubt that:

Remember, theft by larceny, is not the only way to commit grand theft auto. A prosecutor can get you convicted if they prove you committed grand theft auto by false pretense, trick, or embezzlement.

Just because you are accused under the Penal Code 487(d)(1) PC does not mean you cannot fight the case. There are several strategies that a criminal defense attorney can use to argue your case and get the charges dismissed, or at the very least reduced.

You cannot be convicted under Penal Code 487(d)(1) PC if you actually owned the vehicle you are being accused of taking without permission. This also applies if the accused argues they had good faith to believe that the car they were taking actually belonged to them, and it turned out, later on, they were wrong. The defense can argue that they had a claim to right and avoid a conviction.

The accused needs to have the intention to actually take a car without the owner’s permission and deprive them of it. Therefore, if the accused did not have the intent, the defense can use this in their argument.

Nonetheless, this will leave them vulnerable to a joyriding charge. Joyriding has less severe penalties.

It is possible that there is not enough evidence to connect you to the crime, and you were falsely accused of committing the crime.

If you or your loved one find themselves facing charges under the Penal Code 487(d)(1) PC. What you are going to need is an excellent criminal defense attorney like Seppi Esfandi. With over 20 years under his belt handling criminal cases, Esfandi is the right person to help defend your Grand Theft Auto case.