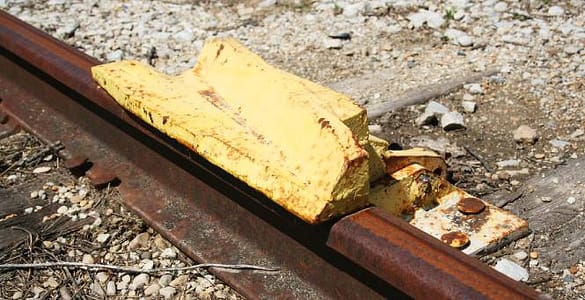 What is the definition of injuring or obstructing railroad tracks under PC 587?

Any person who maliciously removes, displaces, injures, or destroys any part of a railroad, a steam or horse car, any track, branch, branch way, switch, turnout, bridge, viaduct, culvert, embankment, station house, structure, fixture, or any part attached or connected to; including placing an obstruction on any part of the railroad.

What is the definition of a railroad under Penal Code 587 PC?

A railroad is any means of transporting passengers and their belongings in a mode of transportation on rails, that are affixed on tracks. Rail vehicles stay on the rails affixed by tracks for guidance.

Urban railroads refer to transport in suburban and urban areas. Examples include tram, rapid transport, monorails, commuter rails, funiculars. Tram rail systems are used in locations like New Orleans or San Francisco and other public urban streets for above street level travel. They are designated for street car mobility and are accessible by pedestrians. Rapid rail systems are underground for high-capacity travel. The New York subway system is an example.

High speed rails are high speed transits operating at speeds above 106 mph: the Japanese Bullet Train is an example. Monorails, use on rail system and are elevated above ground on a bridge system. Commuter rails are like rapid transport for high capacity but operate above ground and travel from urban to suburban areas. Funiculars are like gondolas but are elevated with cables to assist them transport passengers in forestry or mountainous areas.

What is steam or horse cars as defined under Penal Code 587 PC?

A steam car is a car uses a steam engine. That engine is a combustion engine consisting of a pilot light, boiling water and a burner that is typically fueled by kerosene. A horse car is a carriage towed or pulled by two or more horse. The premise is that steam cars and horse cars were conceptualized in the era of the rail cart and rail roads and are still allowed to operate on tram railroad systems.

What are the general components that make a railroad system under Penal Code 587 PC?

A branch is an off-route railroad station that connects to the main station. The branch way are the rail systems that extend the branch station to other routes. A railroad switch is an installed pivot that allows railroad carts to transfer from one set of rails to another. A turnout is the mechanism devise that when activated alerts the switch to guide the rail cart from one track to another.

A bridge is an elevated construction that encases railroad systems to transfer rail carts above ground from rivers, oceans, and other obstruction where railroad systems could not be installed. Similar to a bridge, a viaduct performs the same function but is not as elevated. A culvert is installed under the rail systems to help absorb water, and fluids from transport and release them into dams, embankments, and other areas to keep the rail system dry. Embankments are man-made elevated supports created to help absorb the dissipation of fluids and conceal the culverts. Embankments can be made from concrete, grass, and debris.

What is the mental state required for a violation of Penal Code 587 PC?

Malicious is the mental state required for a violation of Penal Code 587 PC. Maliciousness is when a person disregards that the result of their conduct can lead to a consequence of substantial injury, death with a disregard of the results.
This intent is to cause injury, obstruction or obstacle on a railroad track system that impedes the progress of a train, steam car, horse car, or any equipment utilized for railroad track system.

What are the penalties for a violation of Penal Code 587 PC?

What is an example of a violation of Penal Code 587 PC?

What are defenses to a violation of Penal Code 587 PC?