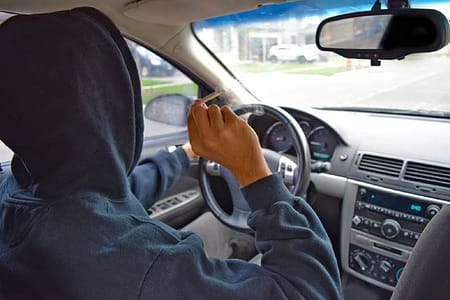 Driving While Addicted To A Drug – Table of Contents

It is unlawful for a person who is addicted to the use of any drug to drive a vehicle. This subdivision shall not apply to a person who is participating in a narcotic treatment program approved pursuant to Article 3 (commencing with Section 11875) of Chapter 1 of Part 3 of Division 10.5 of the Health and Safety Code.

So while this statute does make it an offense for a drug addict to drive, it does make an exception for addicts who are enrolled in approved drug treatments to maintain their driving privileges.

Under VC 23152, a drug is considered any substance or a combination of substances, other than alcohol, that can affect the nervous system, brain, or muscles, impairing their ability to drive a vehicle as an ordinarily cautious person in full possession of their faculties, and using reasonable care would drive under similar circumstances.

Driving while addicted to a drug is labeled as a misdemeanor offense in California. If convicted the penalties faced will depend on how many prior DUI convictions the defendant has.

For a first time offense, the defendant could be sentenced to:

With each subsequent DUI offense, the penalties get more severe. You should note that any form of California DUI will count as a prior conviction for Vehicle Code 23152(c) VC.

Crimes Related To Driving While Addicted to A Drug

For a defendant to be convicted for driving while addicted to a drug. The prosecutor has to prove without question that:

If you happen to be under investigation for violating Vehicle Code 23152(c) VC. There are some defense strategies a criminal defense attorney can use to argue your case and get your charges dismissed. Here are a few examples:

The Vehicle Code 23152(c) VC statute makes an exception for addicts who were enrolled in an approved drug program to continue driving. Thus if the defendant was enrolled at the time of their arrest. This can serve as a solid defense for the trial.

Is Not Addicted To a Drug

One key element of violating VC 23152 is the accused actually has to be a drug addict. You may find the accused is not actually addicted to the drug but uses the drug habitually. There is a clear definition of what drug addiction is under this statute. Hence if the defendant does not meet the requirements of addiction. They cannot be convicted for driving while addicted to a drug.

Driving While Addicted To A Drug – Hire Us

Being charged under Vehicle Code 23152(c) VC can carry some serious penalties. Thus, to ensure you get your charges dismissed or reduced, you will need an experienced criminal lawyer like Seppi Esfandi. Esfandi has a great track record of defending DUI cases and is bound to prove invaluable in your case.