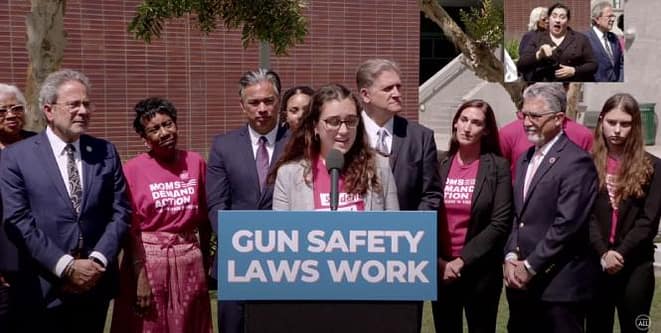 The Constitution’s Second Amendment says that people in the State of California can own and carry guns. But the state has the right to regulate and limit who can possess certain firearms and guns in general if it thinks doing so will make Californians safer.

Because of this, California’s gun laws are some of the country’s strictest laws. To buy a rifle or shotgun you have to be 18 years old. To buy a handgun you have to be 21. The Dealer’s Record of Sale (DROS) process requires all gun sales in California, including private sales and gun shows, to go through licensed dealers.

The California gun laws are summarized as follows:

Californians may sue anybody who sells unlawful assault weapons, components that can create weapons, firearms without serial numbers, or other weapons that are not registered with the State of California.

California’s gun safety laws save lives and serve as a model for the rest of the country looking for answers.

Since the early 1990s, the number of gun deaths in California has dropped by half.

From 1993 to 2017, 55% fewer people were killed by guns in California. Brady California states this is four times as much as it fell in the rest of the country. Many of California’s most influential gun laws were passed in the early 1990s. As the state’s gun laws got stricter, gun deaths dropped by 37% compared to the national average. The Giffords Law Center said California was the safest state for guns as of 2021.

In places like Florida and Texas, where gun laws are becoming less strict, the number of people killed by guns went up by more than 10%.

Californians are now 25% less likely to die in a mass shooting than people in other states. Even so, there were still several high-profile shootings in the state. The bad guys either get their weapons from outside the country or make them themselves. The number of young persons killed by guns in California is also 58% lower than the national average despite its large population.

As stated, Californians must wait ten days after applying to purchase a gun. Studies show that laws with waiting periods are linked to lower rates of gun suicide. According to one estimate, waiting period laws reduce gun suicides by 7–11%. One study found that waiting a few days before buying a gun can cut gun-related murders by about 17%. From 2010 to 2019, the number of gun deaths in California dropped by almost 6%. During that time, about 9% fewer people were killed with guns, and about 5% fewer people killed themselves.