Inmates Should Not be Shackled in Court 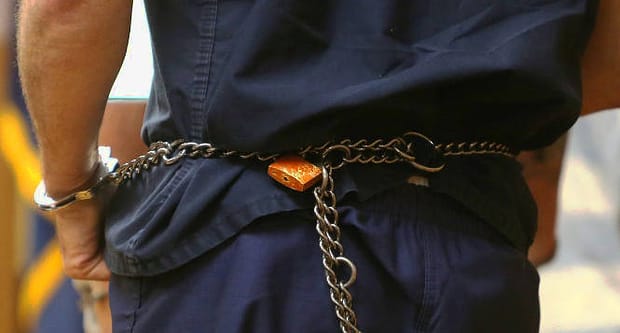 Considering that Inmates Should Not be Shackled in Court, In the United States, a person accused of a crime can be held in jail before all of their court appearances to ensure that they are present during required hearings and at trial where their guilt is determined.

Under the law, being held in jail is to ensure that you are present at your court hearings, and is not considered “punishment”.

Despite the presumption of innocence during trial, where the prosecution must prove “beyond a reasonable doubt” that the defendant was guilty of the crime, pre-trial hearings actually assume the defendant’s guilt, such as bail hearings.

As if jail itself isn’t humiliating enough, being brought before the court wearing metal chains like an animal is the ultimate disgrace.

The least the court can do is provide the defendant a proper policy in which to defend himself or herself in accordance with the doctrine at the heart of our judicial system, “innocent until proven guilty”.

Not only is it degrading, it also puts a bad light on the defendant in the courtroom, giving him or her an unfair disadvantage. When you’re in shackles, you already look like a convict.

9th District Rules to Inmates Should Not be Shackled in Court

The Ninth Circuit ruled that the Southern District of California’s policy of shackling detainees unconstitutionally violates the defendants’ right to be treated “with respect and dignity in a public courtroom, not like a bear on a chain.”

The marshals and deputies in California have argued that bringing inmates to court in shackles is a necessary security measure and would cut costs. However, the Ninth Circuit court says that the marshals have not proved the asserted risks, and say that less restrictive measures, such as increased staffing, would suffice and uphold the defendant’s presumptive innocence and to be treated with respect in a public courtroom.

Those ruling against shackling of inmates cite that the “constitutional liberties” of defendants must be protected.

“At the heart of our criminal justice system is the well-worn phrase, innocent until proven guilty, and while the phrase may be well-worn, it must also be worn well: We must guard against any gradual erosion of the principle it represents, whether in practice or appearance.”

Under the new ruling, before a defendant is shackled, the court must make an individual determination that shackling would serve a compelling purpose and is required to maintain order in the courtroom. Otherwise, the inmate must be UNSHACKLED before entering the courtroom.