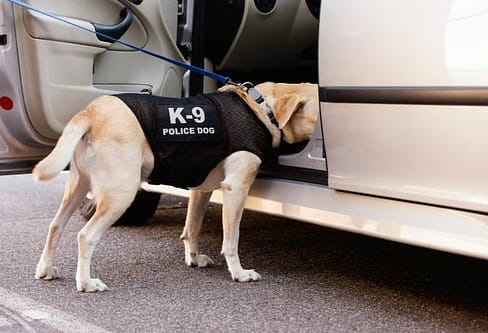 Waiting on the K-9 Unit

A trained police dog is used in a canine smell test, also known as a police dog sniff test, to hunt for evidence of criminal activity. Police dogs are often used to smell illicit narcotics during a police search since they may be taught to recognize a wide range of substances.

Officers often employ dog smell tests while searching for evidence without being able to go through someone’s items owing to privacy concerns. Canines, for example, are often seen sniffing through the bags of travelers suspected of bringing narcotics into the country. Police dogs may also be employed to smell a person’s clothing for narcotics. Police officers also use sniffer dogs during routine traffic stops.

The Fourth Amendment does not ban the use of a dog to sniff out goods in public, as long as the dog is legally present and the behavior is reasonable. To ensure that the person’s 4th Amendment right to be free from unreasonable searches is not violated, the police must adhere to a set of guidelines. You should be aware of the following rules if you are pulled over for a traffic check and a canine is being used to search your vehicle:

How Can a Traffic Stop Offense Be Suppressed?

If a court judges that the police had no reasonable suspicion to justify delaying a driver, yet the motorist was nonetheless delayed, any evidence unearthed as a consequence of that delay will be suppressed, which means that it cannot be used against that motorist in court. The sheer smell of marijuana is no longer sufficient for California law enforcement authorities to justify a search during a traffic stop since marijuana is lawful now in California.

For anyone who is in a situation where they are stopped by federal law enforcement, it is crucial to keep in mind that federal law prohibits all cannabis possession and consumption.

Rights You Have Over a K-9 Search & Seizure

Anyone who has been stopped for a traffic search should take advantage of the protections the government provides like:

You might need to speak with an attorney if you’ve been stopped and exposed to a police canine sniff test during the traffic stop. Having a drug lawyer on your side may help you establish if the results of a dog sniffing test could be used against you in court.