What’s the Line Between Hate Speech and Hate Crime? 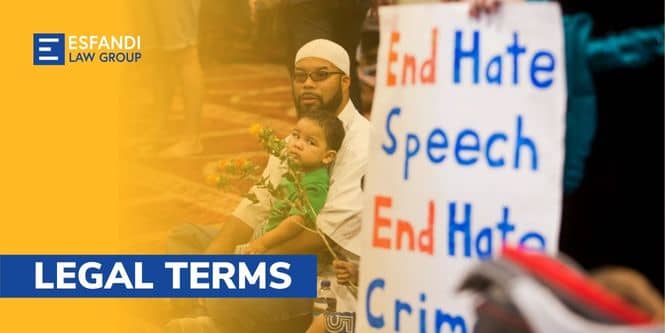 The border between hate speech and hate crimes is blurred for many Americans. Associations have been campaigning against present hate crime regulations because they stifle free expression. While hate speech is mostly uncontrolled owing to the broad framework of free speech, there is an agreement in the legal community that a hate crime extends beyond offending words and actions. The definition of hate crimes is expanded to encompass acts of violence against members and property of a specific group.

U.S. law does not define “hate speech,” just as it does not define “evil thoughts,” “rudeness,” “unpatriotic discourse,” or any other kind of communication that some may find offensive. Hate speech is generally defined as any utterance intended to denigrate, humiliate, or instigate hatred towards a group or class of individuals because of their race, religion, skin color, sexual identity, gender identity, ethnicity, handicap, or national origin.

The First Amendment safeguards free speech in the United States, including hate speech. The First Amendment requires the government to preserve vigorous discussion on subjects of public concern, even if such debate devolves into disagreeable, rude, or bigoted speech and causes others to experience sadness, resentment, or terror. Hate speech may only be criminalized under existing First Amendment doctrine if it incites impending criminal behavior or consists of explicit threats of harm aimed at a person or group.

California law says that acting on an illegal bias is a crime in and of itself. But under this law, you can’t be convicted just for talking without doing anything else unless:

What Exactly Constitutes a Hate Crime?

In the words of the FBI, a hate crime is “a regular felony like murder, arson, or vandalism with an extra element of prejudice.” A federal prosecutor might pursue charges for a hate crime committed based on race, religion, handicap, sexual orientation, ethnicity, gender, or gender identity under federal law.

According to California law, a hate crime occurs when a victim is singled out because of their real or perceived handicap, gender, nationality, race or ethnicity, religion, sexual orientation, or involvement with a person or organization with one or more of these actual or perceived qualities. Following the law, each act might be considered a separate crime, an aggravating circumstance, or a sentence increase.

State prosecutions for hate crimes, according to UCLA’s Kang, often include these components:

The following instances are cited in a circular issued by the LAPD on hate crimes.

Depending on the nature of the crime, criminal penalties may be imposed. Offenders might face harsher punishments if their crime is classified as a hate crime. Consider the following: you commit a crime that has a maximum sentence of three years in jail. If the judge ruled that it constituted a hate crime and a criminal act, it might add up to an additional three years to your jail term.

Certain forms of hate crimes are considered misdemeanors, which carry sentences of less than a year in jail. An existing misdemeanor may be elevated to a felony if motivated by hatred, as stated in Section 422.7 of the Penal Code. You may prevent that by retaining the services of a competent criminal defense attorney.