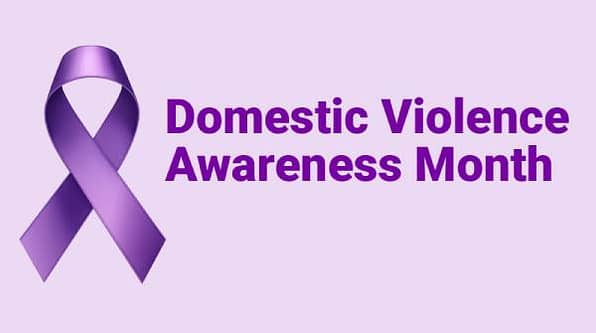 It’s been a hundred years since wife-beating was made illegal in the United States. Nevertheless, if you’ve seen the classic TV comedy, “The Honeymooners,” (1955-1956), you’ve probably seen fabulously fuming New York City bus driver Ralph Kramden (Jackie Gleason) raise his fist and threaten to give his not-so-submissive wife, Alice, a whack that will send her “to the moon, Alice, to the moon… One of these days… one of these days… Bang! Pow! Right in the kisser!” You may even have laughed. And when Ricky Ricardo puts Lucy over his knee and spanks her after one of her outrageous escapades on “I Love Lucy,” (1951-1957) or jealous Lucy beats Ricky with a pillow, it’s meant to be funny; it was funny (possibly adorable) to audiences at the time. Time changes all things, including perception of what constitutes domestic violence.

October’s Domestic Violence Awareness Month was launched in 1987. Its purpose was “to connect and unite individuals and organizations working on domestic violence issues while raising awareness for those issues. Over the past 30+ years, much progress has been made to support domestic violence victims and survivors, to hold abusers accountable, and to create and update legislation to further those goals.” [National Coalition Against Domestic Violence] The California State Senate’s Concurrent Resolution 54 [SCR 54] also designates October as Domestic Violence Awareness month, specifically in California.

The point is: Domestic Violence is such a big problem that it has been determined (on both federal and state levels) that there ought to be a month devoted to the awareness of it.

The National Coalition Against Domestic Violence [NCADV] provides impressively staggering statistics on the (growing by the minute) number of gun related domestic violence fatalities, the number of people who are physically abused by an intimate partner each year, how many calls are made each day to domestic violence hotlines, and the number of people who have been raped in the United States. Their stated mission is “to support efforts that demand a change of conditions that lead to domestic violence.” They see these causal conditions as “patriarchy, privilege, racism, sexism, and classism.” The NCADV goes on to promise that “We are dedicated to supporting survivors and holding offenders accountable and supporting advocates.”

Personally, I grew up in a household headed by a Veteran father who had twice been a Prisoner of War. His resulting PTSD went untreated (despite his physician’s advice) and, as a result, he would have violent episodes. No one in our family would have dared to call the police, even if our lives were in danger, because my father was the patriarch, the breadwinner, the foundation of the family. Having him arrested, prosecuted, and “held accountable” would have done nothing but jeopardize his professional life and throw our family into (seemingly worse) crisis.

We’ve all heard stories of terrible abuse and suffering that happens within families. It’s often the case that it’s in every member of the family’s best interest to protect the abuser from discovery because the abuser’s trigger is the loss of (the illusion of) control.

People who are violent can benefit by learning to manage their anger. There are many excellent Anger Management programs available. However, getting an abuser to participate without he/she/they being required to by law is, obviously, another story.

A friend who was convicted of a domestic abuse misdemeanor got “weekend jail and community service and counseling.” He says he wished he’d gone to the “awesome” therapist, Dr. Richie Cole, before everything went down. He says he (and his family) were lucky because “he had a job and good attorney. That is the difference a good lawyer makes.”

When another friend’s cruel and abusive husband gained custody of their children through family court manipulations, she wanted to kill him. She debated whether it would be smarter to hire a hitman (“cheaper than hiring a Family Law Specialist”) or surrender to Lifetime Movie madness and enjoy the delight of twisting the knife herself. After pondering these options, praying, considering the possible consequences, then praying some more, she decided to enroll in an inexpensive ten-week Anger Management program at Fuller Theological Seminary. As it turned out, she was the only Anger Management participant who was there voluntarily and not as a result of legal decree. She told me that the most valuable thing she learned in the Anger Management program (and what she “decided to make a lifelong habit”) was that when she found herself feeling battered, overwhelmed, and panicking to stop and ask herself:

What is the truth?

Domestic Violence occurs when a controlling person feels out of control and lashes out in an effort to regain a semblance of control.

What would you do (not do) if you saw an adult-child caregiver viciously berating a wheelchair-bound aged elder?

What would you do (not do) if (post-pandemic) you saw a young couple fighting on the street?

Of course, how one responds in the moment of crisis is unpredictable; nevertheless, pondering what you believe regarding personal accountability is one way to mindfully participate in Domestic Violence Awareness Month.

The Council on Criminal Justice reports that reported domestic violence incidents went up 8.1 percent during the Covid-19 Pandemic. Isolation, financial stress, and increased substance abuse are the likely culprits.

Remember, controlling people fear abandonment and abuse happens when the abuser feels insecure, unstable, and out of control. Simultaneously, “The cure for whatever ails the dependent person is to become more independent.” [David Viscott, Emotional Resilence] Because the only way to deal with a controlling person is to become strong enough not to need that person, the most dangerous time for a domestic abuse victim is when he or she is actually leaving the domestic violence riddled relationship. So, it’s not just the fleeing abuse victim who needs help. Abusers need help to learn stop abusing, especially if they are facing losing their relationship(s).

The National Domestic Violence Hotline partners with 211LA to provide referrals and resources.

For more information and help in the Los Angeles:

“Los Angeles Resources for Families and Victims of Domestic Violence”

A good Domestic Violence Defense Attorney can help you turn obstacles into fair chance success using the courts. We are offering a 20% discount on DV cases throughout the remainder of 2021.