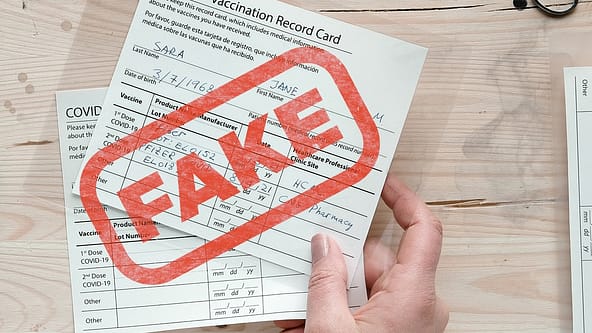 Criminal Possession of a Counterfeit Document

The increased spread of the delta variant all over the country has motivated numerous schools, businesses, and local government institutions to require vaccinations cards to gain access into these establishments.

Nonetheless, this action has motivated various individuals to try and skirt these restrictions by using fake vaccination cards. This, in turn, has created an opportunity for others to profit by distributing and selling fraudulent vaccination cards.

However, both the state and federal governments have strongly stated that the distribution and selling of false vaccinations cards can be a state or federal crime. But despite the threat of serious penalties, there has been an increase in the number of fraudulent Covid-19 vaccination cards seized by law enforcement.

The charges these individuals are facing are just the tip of the iceberg of some of the penalties one could be facing if found distributing fake vaccination cards. Both the federal and state governments have iterated they intend to take stringent measures on any individual caught distributing phony vaccine cards.

Some of the charges one could face include:

Most vaccines usually carry two seals. One, from the center for disease control and prevention (CDC). Another from the health and human services. Forging or wrongfully using any of these seals to help in producing fraudulent vaccination cards for distribution could land you in federal prison for up to 5 years and/or a maximum fine of $5,000.

A person who buys or uses a phony vaccination card knowing it is fraudulent can still face similar penalties under this charge.

One can be charged with wire fraud in connection with distributing fake vaccine cards if they used an electronic mode of payment such as Venmo or CashApp to receive their payments after distributing the false vaccine card. Simply communicating with someone about sending you the money for the phony card can be enough to get you charged with wire fraud.

In most cases, people accused of committing wire can also be accused of mail fraud. Mail fraud in connection with the distribution of fraudulent cards involves using mail to deliver these illegal cards to your clients. Both crimes usually result in a 20-year jail term in federal prison and a maximum fine of $500,000 for each crime.

Accused of a Crime? Hire the Best

If facing criminal charges in the state of California? Do not hesitate to contact Esfandi Law for a free consultation. Seppi Esfandi has over 20 years of experience handling criminal cases in California and will aggressively argue your case in court.