What Should I Expect if I’m Arrested at a Protest? 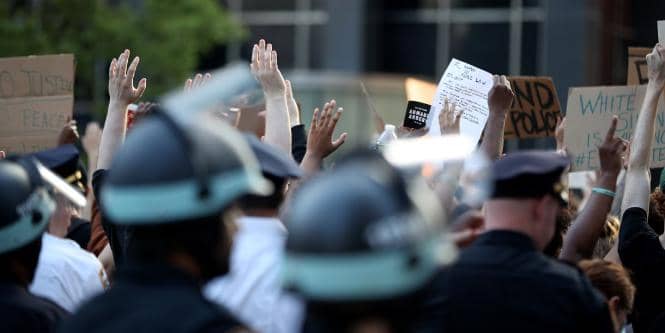 The Freedom to Peacefully Assemble

The freedom to peacefully assemble and protest is guaranteed under the First Amendment. In some situations, government officials do have the power to limit free speech or free assembly. Learn your legal rights inside and out before venturing out onto the streets.

There are different reasons why you may be arrested during a demonstration. For example, law authorities may decide to arrest you if your gathering disrupts automobile or pedestrian traffic. The authorities may also disperse violent demonstrations and arrest protestors who engage in assault or the destruction of private property. You may be arrested if you violate an order to disperse or disrespect state/country curfews.

If you are detained during a protest, you will be interrogated and searched before being transported to the nearest police station for further assessment. Your fingerprints and photograph will be taken there, and you will be placed in a holding cell. You then have the choice of posting a bond or remaining in jail until your court appearance, at which point your bail amount may be raised if it is decided that you constituted an unacceptable flight risk.

An arraignment is your original court attendance, which must happen during the first 48 hours following your detention. Amidst your arraignment, you will be notified of the accusations against you and required to enter your plea of guilty or innocent. If you plead guilty, you will be immediately punished; if you plead not guilty, you will be brought to court. The court will establish a trial date and consider whether to pardon, set, change, or reinstate your bail. If you fight the claims against you in court, you must appear within a few weeks following your arraignment date. You will bring your case to a court, who will finally issue a decision.

Maintain your composure if the officer uses force and refuses to speak. If an officer refuses to explain your arrest, request to be released. You are never required to delete photos and videos from your phone, and you can deny a search.
If possible, record the arresting officer’s badge number or identifying information, or arrange for a fellow protester to document your arrest. This information might be useful for future legal proceedings or written complaints to the agency’s internal affairs division or the city’s citizen complaint board.

Suppose you are concerned about receiving your daily medication if detained during a protest. Numerous event planners recommend bringing a one- or two-day supply of medication in its pharmacy-issued container. It will be kept with you at the precinct, and any other items confiscated from you will be restored in the event of an emergency.

What Are Some Common Punishments For Protesting?

Arrests at protests can be financially ruinous. Bail, penalties, legal expenses, and court costs can soon become prohibitive. Some attorneys approximate a protest conviction can add up to $10,000-$12,000 for a good solution that leaves no record. This high expense would be unplanned for most individuals, especially jobless or low-income people. Fees may include indirect costs. A few days in custody might cost someone their job , salary and can reduce income and earning capacity even without being charged.

Below is a list of protest arrest accusations and their associated punishments:

How to Defend Against Police Surveillance at Protests and Rallies

What is “Seditious Conspiracy?”

You have the freedom to appeal the court’s judgment if you were wrongfully convicted of any of these crimes during a demonstration. If you decide to seek an appeal, you must gather a group of skilled and experienced attorneys to represent you.