Can I Go to Jail for a DUI in Los Angeles? 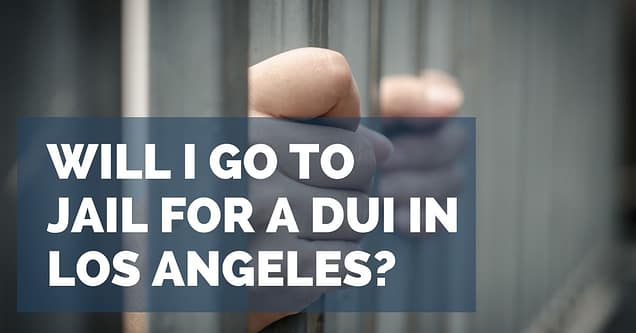 They say that buzzed driving is drunk driving—and in most cases, the law agrees. In the state of California, any driver with a blood alcohol content of .08% or higher is guilty of driving under the influence. If you are a commercial driver, that percentage drops to .04%. And if you’re underage, the limit is .01%.

You may have had a drink or two and thought you were fine to get behind the wheel. Unfortunately, the cop who pulled you over thinks differently.

If you have been charged with a DUI in Los Angeles, you may wonder what happens next. Will you receive a fine? Go to jail? Here is a quick overview of what you can expect from DUI charges.

When you have been charged with a DUI in Los Angeles, it can be overwhelming. You can’t make an effective legal plan unless you know what’s at stake.

Below, we have listed the possible outcomes for a first-time offender.

The initial fine for a DUI conviction can be as high as $1,000. Add to that the potential security, conviction, and laboratory fees. Ultimately, the total amount you have to pay could be triple the initial fine.

Even for first-time offenders, jail time is on the table as a possible penalty. California does not go easy on convicted DUI drivers. A history of speeding, driving recklessly, or refusing a breathalyzer will work against you.

The sentence could range anywhere from two days to six months.

Working with an experienced Los Angeles DUI lawyer is your best hope when you want to try to avoid jail time.

Convicted offenders who don’t receive jail time might face a sentence of three to five years of informal probation. This sentence will also include mandatory completion of a DUI course.

In total, you could be looking at 30-60 hours of class time over the duration of your probation.

All convicted DUI drivers will receive a license suspension. For first-time offenders, the time frame is usually six months. A higher blood alcohol content at the time of arrest will often result in prolonged suspension.

If you need to drive to work and/or school, a lawyer can help you apply for a restricted license. However, you may be required to use an ignition interlock device.

A DUI conviction for first-time offenders is classified as a misdemeanor. This means that the penalties are not as severe as they would be for more serious charges. With a knowledgeable Los Angeles DUI lawyer, you may even be able to avoid jail time.

Penalties for Second and Third-Time Offenders

Each time you are convicted of driving under the influence, the fees and fines are generally the same. However, second and third offenses (though still classified as misdemeanors) demand longer jail times, probation, and license suspensions.

In these cases, you can expect to face the following penalties:

An experienced Los Angeles DUI lawyer is your best bet for limiting these penalties.

Certain DUI convictions fall into the category of felony offenses. Here is a list of aggravating factors:

If you are facing felony DUI charges, the penalty could be anywhere from 16 months to life in prison. Fines will be higher and probations or suspensions will also be longer.

The answer to whether you’ll go to jail for a DUI in Los Angeles is not always simple. If you want the best possible outcome, it is wise to consult with a qualified lawyer who can help you put your best foot forward going into court proceedings.

Keep in mind that after your arrest, you will have ten days to challenge the automatic license suspension. It is best to hire an attorney well before that ten-day mark. This will give your lawyer time to prepare for DMV and court proceedings.

A good attorney brings these qualities to the table:

A qualified lawyer will also be able to identify any flaws in the prosecution’s case. If the breathalyzer was faulty or the investigation was unsound, your lawyer can seek to have the case dismissed entirely.

At the end of the day, there is only one way to determine whether you’ll be facing jail time for a DUI in Los Angeles. Bring the facts of your case to a qualified lawyer and move forward with a legal strategy from there.