What Is a ‘Writ Of Habeas Corpus’ in Criminal Law? 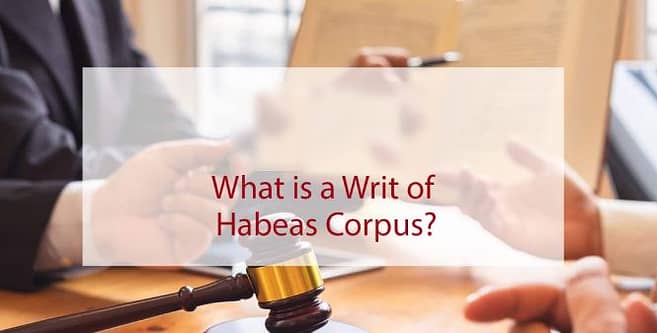 Habeas corpus has English common law foundations. The mechanism allows prisoners or others to protest their lawful imprisonment. A writ of habeas corpus (which means “produce the body”) is a court order requiring a public officer (such as a warden) to bring an imprisoned person before the court and justify their confinement. During a court hearing, the detainee and the government may provide evidence concerning the person’s legal detention. The court may also issue subpoenas to collect further evidence.

The judge may award the prisoner remedies such as:

Habeas corpus and direct appeal are different. Defendants may appeal a conviction or sentence to a higher court, which evaluates the trial judge’s findings. Habeas corpus challenges incarceration if a direct appeal fails. It’s a final recourse for convicts who claim a judicial miscarriage.

The courts hear habeas corpus petitions, but the procedure differs from criminal cases. Therefore, you need a lawyer who understands California prisoner rights and habeas corpus. In California:

Prisoners or defendants in California can only file a writ of habeas corpus if their case meets the following requirements:

How Long Do You Have to File Habeas Corpus in California?

A petition for habeas corpus filed by a state prisoner does not have to comply with any “set legislative timeframes. Instead, petitioners in the Golden State are urged to submit known claims as early as circumstances allow. Petitioners must specify when they first became aware of the allegations made in the Writ of Habeas Corpus. It is up to the petitioner to prove that there was no “substantial delay.” When determining whether there was a substantial delay, the clock starts ticking from the moment the petitioner or counsel realized, or should have known, that the evidence presented was sufficient to warrant proceeding with the claim.

If the petition is filed with a “substantial delay,” the petitioner must provide a “good reason” for the delay. Good cause is usually defined as an active inquiry into additional claims that might be included in the Writ of Habeas Corpus. In most cases, “good reason” does not include willful ignorance.

The court may nevertheless review a Writ of Habeas Corpus in four restricted situations when there was a “substantial delay” in submitting the Writ, and the petitioner did not have “good reason” for the delay:

Related Article: What is a ‘Cruz Waiver’ in Criminal Law?