May 11, 2021 by Seppi Esfandi in California  Criminal Defense 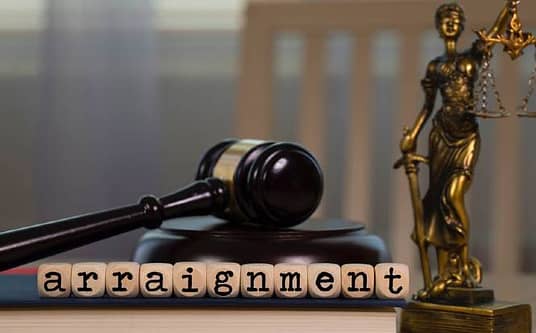 The first court date after an arrest is called an Arraignment. After an arrest, a defendant who is in custody must be brought to court and arraigned within two court days. Arraignment is the earliest stage of a criminal proceeding.

What happens at an Arraignment? The defendant is brought before the Judge of the Superior Court and the formal charges are read. The defendant is given the opportunity to enter a plea of guilty, no-contest, not guilty, or not guilty by reason of insanity. The defendant also has a chance to demand a speedy trial or waive time for a future court date (more on this below).

The judge usually sets bail at the Arraignment. Although the arresting police department sets a preliminary bail based on the arrest charges, the Court actually sets bail according to the charges that are subsequently filed, and, typically, the judge sets this bail in accordance with a pre-set bail schedule depending on the County where the crimes are charged. There is one bail schedule for Felonies and another for Infractions and Misdemeanors.

At the arraignment, a defendant’s attorney can ask for a bail reduction or an Own Recognizance (OR) release based on a promise to appear in Court.

Once these arraignment issues are settled, a new court date is set. For felonies, this is often in another courtroom called a Preliminary Hearing Courtroom.

If a defendant is not in custody, either because he or she posted bail, was given an OR release, a Citation (Cite) release, or received a letter to appear, then there is no deadline for the setting of the arraignment, as long as it is within the statute of limitations. Typically, this means that cases must be filed within one year of the crime for misdemeanors and within four years for felonies. The defendant can also bail out between arrest and arraignment. If this happens, he or she is considered an out-of-custody defendant, so there is no two day deadline for the arraignment.

A defendant has four choices of plea to enter: guilty, no-contest, not-guilty, or not guilty by reason of insanity. The typical plea at the early stage of the arraignment is not-guilty. Then, a new date for plea negotiations is set and, if plea negotiations don’t work out, a trial date is set. In some cases, an experienced defense attorney will realize that the prosecutor has undercharged the crime. For instance, if the prosecutor has left out a defendant’s prior strike, the defendant’s attorney might plead the defendant guilty at this early stage.

The entry of a guilty plea bars the prosecutor from amending the complaint to add more serious charges later because of the Fifth Amendment rule against Double Jeopardy. If the defendant is not represented by a private or public attorney at the arraignment, the Court will automatically enter a not guilty plea on the defendant’s behalf and set a new court date at which the defendant will obtain counsel.

Other than the motion for a bail reduction or OR release, a less common motion at an arraignment is a demurrer. A demurrer challenges the sufficiency of the complaint itself on legal grounds such as:

Demurrers are rare and are rarely successful at Arraignment.