May 25, 2021 by Seppi Esfandi in California  Criminal Defense 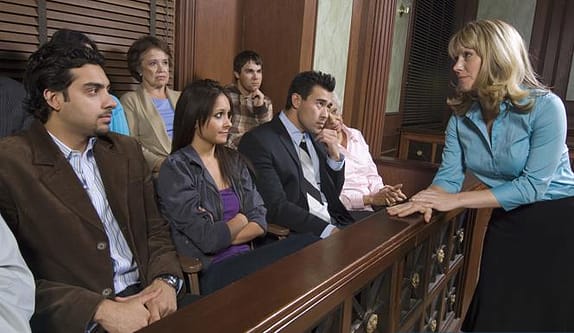 Every criminal defendant in California has a right to a speedy trial. After the arraignment, the Defendant must be given a trial during a specified time period. Depending on the charge and on whether or not the defendant is in custody, a trial usually takes place between 30 and 90 days after arraignment.

In a criminal trial, the prosecution has the burden of proof to present evidence showing the defendant is guilty beyond a reasonable doubt. The defense does not have to present any evidence, but, if it wishes, does have the option to do so. Rather than presenting evidence (or “putting on a case”), the defense can simply argue that the prosecution has failed to prove the case beyond a reasonable doubt. In such a case, the jury would have to acquit. To achieve a verdict of guilty or not-guilty, all twelve jurors must agree, i.e. the verdict must be unanimous.

The stages in a criminal trial are:

The case kicks off when a “jury panel” is called into the courtroom. A jury panel consists of several dozen, perhaps 50 or 60, potential jurors who have responded to a jury summons. They are randomly selected to serve on the case and, of these several dozen jurors, twelve are selected to be on the actual jury, along with two to four “alternate” jurors who are selected to potentially fill in for a juror who gets sick or otherwise becomes unavailable.

The Judge, the prosecutor, and the defense attorney ask the jury panel a series of questions. These questions are also known as “voir dire” (which, in French, literally means to “speak the truth”). The Judge will ask perfunctory questions, such as the juror’s occupation, family status, number of children and their occupations, city of residence, and whether the potential juror can be fair as a juror regarding the type of charge in question. After this, the defense attorney and prosecutor, in respective turn, ask questions of the jury. These questions are usually more ideological in nature and attempt to determine the juror’s worldview in order to assess whether he or she would be more favorable to the prosecution or the defense.

Once the jurors are questioned, the Judge and the attorneys jointly select the twelve jurors and alternates who will be seated on the jury. The Judge can dismiss jurors “for cause.” Dismissing jurors “for cause” includes reasons such as:

The juror cannot be fair in this type of case; the juror’s English language skills are inadequate to follow the trial; or the juror has some health concern that would prevent him or her from being able to serve as a juror.

So, for instance, if a juror looks at the defendant and frowns, the defense attorney might consider using a peremptory challenge to excuse the juror.

Once twelve jurors and a few alternates have been selected, they are sworn in and the attorneys make their opening statements.

Many attorneys consider jury selection the most important phase of the trial. Jurors are very powerful because, with no accountability and as the exclusive interpreters of the facts of a case, they can determine a defendant’s fate.

Choosing the right jury can mean victory for the defendant.

After the twelve jurors are administered the oath and sworn in, each attorney makes an opening statement. Opening Statements are not evidence, and, during Opening Statements, the attorneys are not allowed to make arguments about why the defendant is guilty or not guilty.

Opening Statements are only “statements” that the prosecutor and defense attorneys make to tell the jury what evidence they can expect to hear during the trial. They are like trailers or coming attractions for the trial. An attorney making an opening statement might say something like:

“The evidence will show that the defendant was in his garage when the crime occurred.”

During the Opening Statement, an attorney can use media to show what they expect the evidence to demonstrate. This may include power-point style presentations, showing pictures or schematics, or playing 911 tapes. Because the prosecution has the burden of proof, it makes its Opening Statement first, followed up by the defense attorney’s Opening Statements.

After Opening Statements, the “case-in-chief” begins with the first witness called to the stand. Some attorneys, including this author, believe that Opening Statements are the most important part of winning a criminal case. They give the defendant’s attorney the opportunity to frame the issues in the case, provide the defense’s side of the case early on, and rebut the prosecutor’s one-sided version of the case.

The Case in Chief:

The case in chief is the “main course” of the trial. This is where the witnesses are called and questioned by the attorneys. The prosecution gets to put on its witnesses first and examine them directly (hence, the term “direct examination”). The prosecution can also introduce exhibits (such as pictures, videos, and recordings) through their witnesses. After the prosecutor is finished questioning a witness, the defense begins its cross-examination. Attorney and legal scholar John Henry Wigmore deemed cross-examination, “beyond any doubt the greatest legal engine ever invented for the discovery of truth.” Here, the defense attorney gets to score major points with the jury by asking tough questions of the prosecution’s witnesses.

The prosecution has an advantage in closing arguments because it gets two turns. As in opening statements, the prosecuting attorney gets to go first, followed by the defense attorney. The prosecutor then gets a final opportunity to rebut what the defense attorney has just argued. This advantage is often explained as having come into practice because the prosecutor has the burden of proof by the very high legal standard of “beyond a reasonable doubt.”

After the attorneys address the jury with their closing arguments, the case is “delivered” to the jury. The jury’s first order of business is to select a leader, or “foreperson,” to help lead the deliberations. The Judge gives the jury guidance on the law and general principles about what to consider when evaluating the witnesses and the evidence.

The jury is supposed to debate the case until all twelve jurors unanimously reach a verdict of guilty or not guilty. The jury has some tools at its disposal, such as the right to ask the Judge questions, to ask that transcripts from witness testimony be read back to them, and to view the crime scene. However, the jury is not allowed to consider any evidence other than what has been presented in court.

As previously mentioned, the jury is very powerful and it is considered a “black box,” meaning its decision-making process and the reasons supporting its decisions are rarely if ever, questioned.

In a criminal trial, the jury votes as guilty or not guilty. It’s important to distinguish this from guilty vs. innocent. The jury is not supposed to decide if the defendant is innocent, but only if he or she has been proven guilty beyond a reasonable doubt. If this high level of proof has not been demonstrated by the prosecution, the defendant must be found not guilty, which is a far cry from innocent.

In order to reach a verdict, the jurors’ decision must be “unanimous,” meaning that all twelve jurors must vote the same way. If even one juror disagrees with the other jurors, it is a “hung jury” and a mistrial will be declared. However, before declaring a mistrial, the Judge will usually send the jury back multiple times to try to break any deadlocks. A mistrial means that the defendant must either be tried again or that the case must be dismissed.

A not-guilty verdict means that the defendant gets to go home that day, cleared of all charges! With a guilty verdict, the defense attorney will try to convince the judge that the verdict is not legitimate and move for a new trial.

The case proceeds to the Sentencing Hearing at which the defendant’s punishment is determined.