How Do I Apply for a License to Carry a Firearm in California?

August 03, 2022 by Mikel Rastegar in California 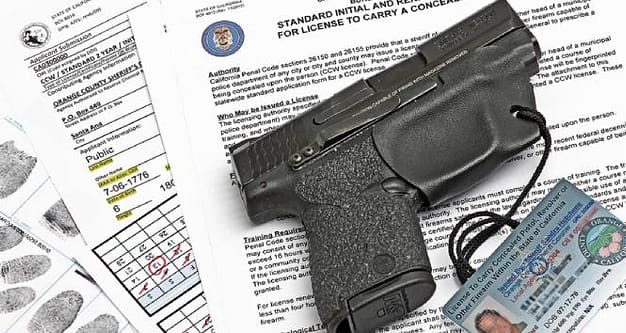 To legally carry a weapon in California, one must apply for a concealed weapons permit (CCW), which allows ordinary citizens to carry firearms in California. Without a CCW, having a loaded or unloaded gun is a crime under:

What are the Requirements for Attaining A CCW?

For the state of California to allow a person to carry out a concealed carry permit, they have to meet the following conditions:

Effective January 1, 2012, Penal Codes 26150 and 26155 replaced the former code 12050, which dealt with the law of carrying concealed weapons. The new rules do not necessarily license firearms. Instead, they issue how permits are given.

What are the Steps for Acquiring a CCW permit?

If someone meets the above requirements and lives in a county with less than 200,000 people, the person is eligible to receive a “modified” concealed weapons permit. In such a case, the person can carry a loaded and exposed firearm in the county where the permit was given.

If a person can prove that their family or themselves are in great danger and meet all the criteria required, they are also eligible to carry a concealed weapon. However, the sheriff and police chief are adamant about informing citizens that carrying a concealed weapon is a right that should not be underestimated.

The application for a CCW permit is basically three steps which include:

What are the Restrictions on Carrying a CCW?

The permit does not allow any person with a CCW permit to carry another weapon apart from a pistol, revolver, and other weapons that can be concealed. Under Penal Code 417, a person with a concealed carry permit cannot use the gun to threaten individuals in an angry, threatening manner. Although, in a situation where someone can prove that they brandished the weapon to defend themselves, they can be excused from such conduct. Also, someone under the CCW might only be allowed to carry the gun in specific locations and at certain times. One must abide by the permit’s restrictions to keep their license because it can be revoked if the conditions are violated.

If one travels, some states might recognize the CCW permit, while others might not. In such cases, it is essential to check the local laws before crossing state lines as laws on CCW vary in different states. If traveling by airline, the Transportation Security Administration has strict rules regarding traveling with firearms and ammunition, which should be taken seriously.

It might be highly daunting whether you are new to carrying or owning a concealed carry weapon permit. Although there are many reasons why someone might need this particular license, the first step lies in knowing the laws since applying for CCW differs for various states.