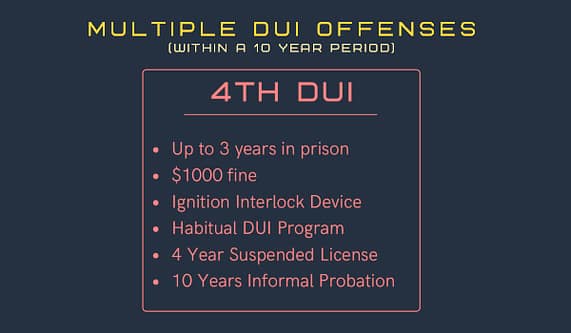 So You got Your Fourth DUI…

This article is part of a series on DUI charges.

In California, DUIs are seen up to repeat offenses up to the fourth time. Following that are grave consequences that jeopardize your future.

Below, we’ll discuss what being charged a 4th time entails – and what you can do to avoid a conviction.

What Constitutes a Fourth DUI?

It means being charged with a DUI for the fourth time – throughout a 10 year span.

Most individuals with a DUI history never reach that point. However, getting there is never good news for a defendant.

California DUI penalties are quite harsh. However, each penalty differs based on the case.

For example, if your record contains previous soft DUI charges, then expect your fourth time penalty to be similar.

However, if your DUI record involves manslaughter, then expect a harsher conviction.

Those are called aggravating factors. The less of those on your record, the better.

That aside, sentencing for 4th time charges include the following:

Prosecutors – How They Charge DUI #4

For a fourth time charge to stick, a prosecutor has to prove that you’ve had multiple DUI convictions before.

Specifically, they’ll have to prove the following:

The codes that define the criteria for a DUI include the following:

What Do Prosecutors Look At?

With fourth time charges, even expunged convictions are looked back upon. This makes it a serious charge for any defendant.

Also, any prosecutor will look at the following records:

What Can You Do to Combat a Fourth Charge?

There are some consequences to that, which include:

The key point of fourth time charge is the increased sentencing.

The best way to fight a fourth charge is by trying to reduce it. Your lawyer can attempt to review and challenge your previous convictions.

Having just a single DUI removed from record can greatly drop your sentence. In fact, it can change your DUI’s classification back to a misdemeanor.

A drop in charge has many pros for you. For example, it means a lesser change of your driver license being revoked.

Where Should You Start?

Our law firm offers all the guidance you need.

You need a lawyer not just for your repeat DUIs. But you a competent lawyer to review and tackle your previous charges.

The more charges you can clear, the better.

We recommend you get started as fast as possible. Call us now for a consultation!

With more than 20 years of experience, Esfandi Law Group’s Los Angeles Criminal Defense Attorneys will fight hard for you. Contact us today to learn more.