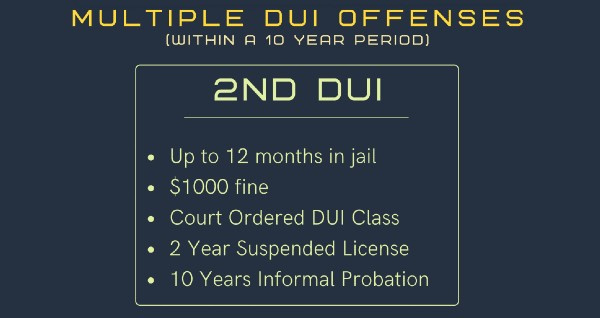 Second DUI? Time for an Attorney

If a defendant was convicted with a DUI (again) within a 10 year period, then their new offense gets registered as a second offense.

But, if the defendant’s first conviction was outside California, then it is not considered a second offense.

If you’re being convicted with a DUI a second time, you will spend an initial 96 hours in jail.

Also, you may receive five years of probation, along with the standard 10 year probation period for multiple DUI offenses.

Rehabilitation is also required. You will need to complete an 18-month SB-38 drug and alcohol education program.

It’s important to note, that in counties like Orange or Riverside, jail time may be more extensive for the second conviction.

What if a Defendant was Still on Probation for the First DUI?

Then it’ll be considered as a probation violation.

In that case, additional penalties will be imposed on the defendant. That excludes the fines and sentencing for second time offense penalties.

If you got arrested for a first time offense, you’ll receive a four-month driver license suspension.

However, if it is your second offense, then the license suspension will be extended. The minimum suspension period for a second time DUI offence is a year.

What if a Defendant Refuses to Take a Blood Alcohol Test?

There are some consequences to that, which include:

A convict is subject to spend mandatory jail time from 96 hours, worst case up to one year.

If you get arrested for a second offense, you’ll need to attend a mandatory rehab program for 18 to 30 months.

Note: the judge may require you to attend other programs such as Mothers Against Drunk Driving (MADD) programs, or others.

What does “Wet Reckless” mean?

The term “wet reckless” is another name for the California Vehicle Code section 23103 charge of reckless driving.

Wet Reckless is sometimes used by lawyers to get you a better deal. But, wet reckless still counts a prior offense.

Therefore, if you get convicted with another offense within 10 years, that offense will be considered your second and the penalties will be applied accordingly.

Can I Get Community Service instead of Mandatory Jail Time?

Generally the Judge cannot remove jail time for the second offense, but your attorney may go to bat for you and get a better deal.

You Should Hire An Attorney

If you get arrested for a second offense, then get in touch with a Los Angeles DUI lawyer and fast. Your lawyer will tell you how to navigate the situation. Also, they will try to get you the best possible outcome in court. Deal with your second time DUI offenses, and contact us now!