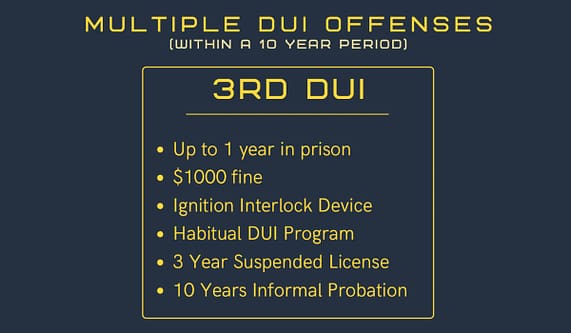 Have you had multiple DUI convictions before?

If so, then take caution. DUIs in CA are counted as priorable offenses. That is, repeat punishments come with greater sentences.

With DUIs, offenses are considered “repeat” if they happen within a 10 year period.

DUIs are considered repeat up to the fourth offense.

To the 3rd repeat, they’re sentenced as misdemeanors. But after exceeding the 4th DUI charge, you risk being convicted with a felony.

Since we’re discussing 3rd time DUIs, a felony shouldn’t be on the table. However, its consequences are more serious than first and second time convictions.

What Are the Penalties for 3rd Time DUIs?

First, you receive 3 to 5 years of probation (informal). You also get sentenced to country jail, for a period between 120 and 354 days.

Next, certain restrictions may be placed on the defendant. They include:

There’s also the possibility of restitution (in the event that the DUI resulted in an accident that damaged another party).

How Do you Avoid a 3rd Time DUI?

For the government to convict you, the prosecutor needs to prove the following:

Next, you have a chance of getting a reduced sentence by picking a jury trial. That is a right afforded to defendants facing misdemeanor charges.

And with a good lawyer, it’s possible to win a jury trial and have your case dropped altogether.

In fact, a good strategy to aim is getting a reduced offense, such as a wet or dry reckless, or an exhibition of speed.

However, they’ll have to argue the following points against the prosecutor:

Sentencing Aside: What About Your License?

Since 3rd time DUIs are misdemeanor offenses, you can choose to get a hearing before the Department of Motor Vehicles.

They’ll assess whether you should keep your license or not.

However, a 3rd time DUI offense does come with a much higher (and longer) suspension threat than lesser repeats.

Also, after a 3rd DUI, you may be designated as an HTO (Habitual Traffic Offender) by the DMV.

With a third repeat, you risk a driver’s license revocation. The revocation normally lasts 18 months.

With a good lawyer, you might get access to a restricted license after the 18 month period. Though you’ll need an ignition interlock device in your car.

Also, you do risk a 3 year license suspension (court-triggered) if the following occurs:

What About Criminal Records?

You can get a third DUI expunged from your criminal records. This’ll erase the charge from your record permanently.

However, you can do so on the following conditions:

Getting your criminal record expunged requires you submit a petition, while dodging an aggravated charge in the first place.

It’s a necessity step, since it ensures that a criminal record doesn’t smear your social or professional future.

At our law firm, we’ll help you avoid and expunge third time DUIs with the least damage possible.

You Should Hire An Attorney

If you get arrested for multiple DUI offenses, then get in touch with a DUI lawyer Los Angeles and fast. Your lawyer will tell you how to navigate the situation. Also, they will try to get you the best possible outcome in court. Deal with your second time DUI offenses, and contact us now!