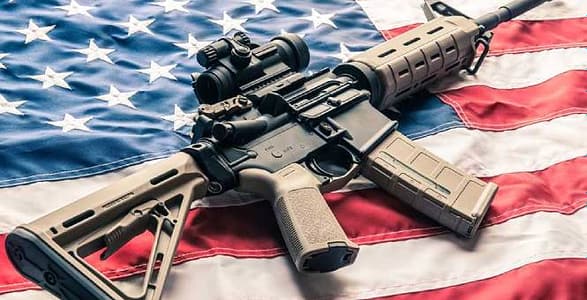 Assault with a Firearm in California – Table of Contents

In California, firearm assault doesn’t require physical harm. Assault, CA Penal Code 240 PC, is defined as an unlawful attempt to commit a violent injury on someone else paired with the present ability and a clear intent to do so.

Therefore, firearm assault is a serious crime that carries misdemeanor or felony charges in California and may take many forms. Firearm assault includes pointing a gun at someone, pistol-whipping, or clubbing someone with the rifle butt, firing a gun in their general direction, or shooting a person.

The Four Elements of an Assault with a Firearm

Under Penal Code 245(a)(2) PC, California laws deem assault with a firearm to contain four elements. These are the facts that a prosecutor must prove before a defendant can be found guilty of a firearm assault.

Legal Definition of Assault with a Firearm in California

Let’s clarify some critical terms that determine the outcome of gun assault charges.

The state uses the term “firearm” to differentiate between a simple assault and an assault with a firearm. In California, a firearm is any weapon that discharges or expels a projectile through a barrel forcefully through an explosion or combustion.

In California, anything that goes ‘bang’ is classified as a firearm if it falls into the following categories.

Legally, application of force applies to any form of offensive or harmful touching and may not necessarily lead to injuries. Therefore, touching someone rudely or offensively may count as such.

California laws define acting willfully as doing something willingly or on purpose. You may not have intended to hurt anyone, break the law, or take advantage of someone, but if you did, you might be found guilty of acting willfully.

The prosecutor must prove that you had the present ability to apply force before being found guilty of assault with a firearm. The current ability to use makes a world of difference if a gun is loaded or unloaded.

You may not be guilty of assault with a firearm if you pointed or waved an unloaded gun at someone. That’s because you can’t fire an unloaded gun. But the charges may stick if you used the gun like a club and attempted to bludgeon or pistol-whip someone with it.

California has some of the most draconian gun laws in the country and imposes steep penalties on gun assault charges. The category of the firearm in question determines the penalties for this crime.

If the defendant used an ordinary weapon – rifle, pistol, or shotgun – they may be charged with a wobbler. The prosecutor may prefer a felony or a misdemeanor charge depending on two critical factors:

When ruled as a misdemeanor, an assault with an ordinary firearm carries a jail sentence and/or a steep fine.

If ruled a felony, assault with an ordinary firearm carries stiffer sentences and/or fines.

In California, assault with a firearm is a felony if it involves a semiautomatic gun, assault rifle, machine gun, or a .50 BMG rifle. These are serious charges that attract stiff prison sentences in state prison.

Assaulting a Peace Officer with a Firearm

In California, assaulting law enforcement officers or firefighters with a firearm is a serious offense that carries stiff penalties. You’ll be found guilty of this crime if:

Due to the sentencing enhancement, assault with a firearm sentence increases by:

Anyone found guilty of assault with a firearm in California has their gun seized and destroyed by the state. Under Penal Code 29800 PC, anyone convicted on assault with firearm charges is prohibited from owning firearms ever again.

A guilty assault with a firearm verdict that entails personally using a firearm or assaulting a peace officer counts as a strike under the state’s 3-strikes law.

If you have a strike on your record and you’re found guilty of any California felony, your sentence for the second felony offense doubles. If you have three strike convictions, one of which is an assault with a firearm, you’re likely to face 25 to life in state prison.

Self-defense is the most common line of defense used by criminal defense lawyers during gun assault trials. Self-defense means that you committed the act, but it was justified under the circumstances. Your lawyer may help to justify that your actions were proportionate to the level of threat you faced.

Legally, you can act in self-defense or another if:

If you or your loved one is being charged with PC 245(a)(2), reach out to our criminal defense attorney for a free case review. We invite you to meet with us in person, submit an online evaluation, or get on the phone with California defense attorneys for a free consultation.

Our California criminal defense lawyers will fight to get the charges reduced or dropped until the end.