What Does ‘Dismissed Without Prejudice’ Mean? 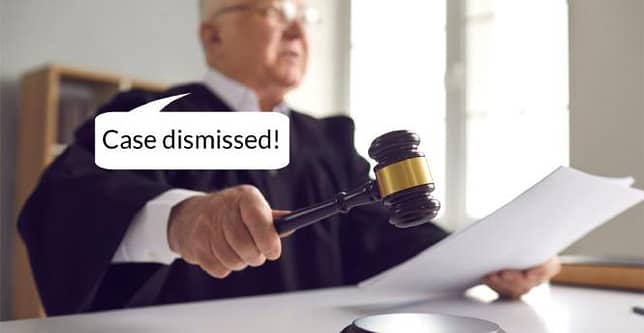 A criminal case may be dismissed before, throughout, or even after the trial.

It could be the outcome of a proposal to dismiss filed by the prosecutor or the defendant, or it could be a court decision with no motion from any of these parties.

In a case, dismissal with prejudice is often a result of a serious breach of the defendant’s civil liberties that cannot be rectified. For example, detention under unreasonable grounds or an unlawful search can result in a case being dismissed with prejudice.

A dismissal with prejudice means that the case is over.

If there is a basis for the matter not to be presented back to court, for example, if the court judges the lawsuit absurd or the topic under discussion is handled outside of court, the charges will be dropped.

If you are charged, your lawyer is supposed to assess shreds of evidence and the charges against you and decide if there is a reason valid for the case to be dismissed with prejudice.

It should be noted that the lawyer may not pursue new charges when the prosecution’s limitation period expires or investigators cannot locate more evidence to settle the issue that resulted in the dismissal. The court or attorney will always notify the defendant following dismissal without prejudice.

What To Do If Your Case Was Dismissed Without Prejudice

It is critical to contact your attorney if dismissal without prejudice is issued on your lawsuit, so they can discuss the limitation period for your particular criminal offenses, what the prosecution is expected to do or what to anticipate afterward. Lawyers are not always informed about the charges that have been refiled or added to their clients’ cases; therefore, it’s critical that the court has your right address and that you check the mail for any documents on refiled charges. You should contact your defense counsel immediately if you receive such a notification.

A voluntary dismissal is frequently presented after the defendant has commenced initiating action. It prevents a matter from dragging on indefinitely and ensures a quick hearing for all parties concerned. A matter dismissed can be reopened and taken back to court. In the United States, another short-form must be filled out to complete this task.

A court can dismiss a matter if there is a justification. Involuntary dismissal is given with or without prejudice based on whether the lawsuit was willingly dismissed or is considered essential for the public good.