May 25, 2022 by Alexandra Carter in Special Report 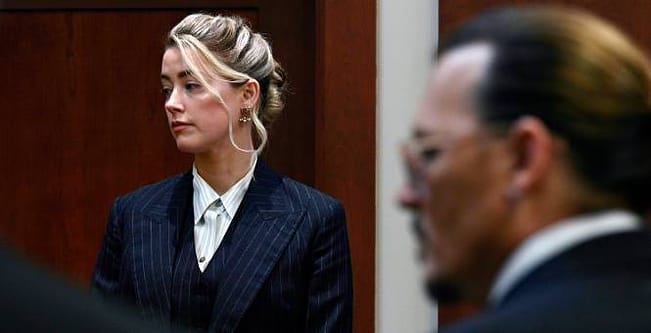 The Johnny Depp vs. Amber Heard defamation trial has captivated audiences around the globe, with live streams of the court proceedings reaching hundreds of millions of people.

No matter if you’re on Johnny’s side or Amber’s side, the trial is shining the spotlight on an important and often overlooked issue, domestic violence inflicted by women against men.

(a) Any person who willfully inflicts corporal injury resulting in a traumatic condition upon a victim described in subdivision (b) is guilty of a felony, and upon conviction thereof shall be punished by imprisonment in the state prison for two, three, or four years, or in a county jail for not more than one year, or by a fine of up to six thousand dollars ($6,000), or by both that fine and imprisonment.

(b) Subdivision (a) shall apply if the victim is or was one or more of the following:

(c) Holding oneself out to be the spouse of the person with whom one is cohabiting is not necessary to constitute cohabitation as the term is used in this section.

As you can tell, the law does not assert that only a man can inflict violence and be charged with domestic abuse.

Women can also perpetrate violence against their partners and be charged.

The most common domestic violence crimes in California include battery, abuse, and neglect. Some of these crimes are charged as felonies, while others are misdemeanors, depending on the circumstance and severity of the offense, as well as the defendant’s criminal record.

Penal Code 243(e)(1), California’s domestic battery law, makes it a misdemeanor to inflict force or violence on an intimate partner. There is no requirement for a visible injury to be convicted of this crime. Punishment for this misdemeanor includes a fine of up to $2,000 and one year in county jail.

Penal Code 273.5, California’s more serious ‘Corporal Injury’ law, makes it a crime to inflict injury that leads to even a slight physical injury on an intimate partner. The penalties for this felony charge range from one year in the county jail to four years in California state prison.

Penal Code 422, the “criminal threats” law in California makes it illegal to threaten someone with serious harm. This crime is a “wobbler” and can be charged as either a felony or misdemeanor.

The misdemeanor charge is punishable by up to one year in jail, while the felony charge can include up to four years in prison.

How to Reduce or Dismiss a Domestic Violence Charge

There are a few legal defenses a criminal defense attorney will deploy to help you reduce or dismiss domestic violence charges, including:

Plea bargains can also be used to reduce domestic violence charges. In these instances, you may plead guilty to a lesser offense to avoid the stigma and consequences of a domestic violence conviction, such as losing your right to own a firearm, losing custody rights, and being deported.

Recognizing Domestic Violence in a Relationship

There are some telltale signs of domestic violence in relationships that you should be aware of, including if your partner:

Here are the signs to look out for that someone you know may be being abused by their partner:

Recovering from a Domestic Violence Charge

Working with a skillful attorney is your best bet to get your charges reduced or dropped so that you can reclaim your life and recover from the bad press and overall image that domestic violence charges bring. It’s also imperative that you follow all court orders, including protection orders, fines, rehabilitative programs, community service, probation terms, and anything else the judge imposes on your sentence.

Following these stipulations to the tee will allow your case to progress as fast as possible so you can get back to living your normal life.

Are You Accused of Domestic Violence?

No matter what side of domestic violence you’re on, we can help. Our team of experienced attorneys is here to help you file or fight charges and get your life back. Contact us today for a free consultation to learn more.