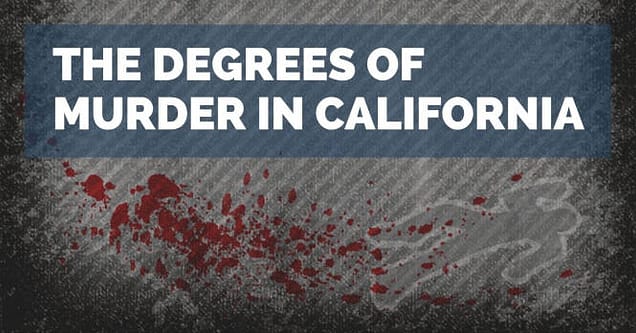 What Defines Murder in California?

“The unlawful killing of a human being, or a fetus, with malice aforethought.”

PC 188 defines ‘Malice’ as the following:

1. Malice is express when there is manifested a deliberate intention to unlawfully take away the life of a fellow creature.

2. Malice is implied when no considerable provocation appears, or when the circumstances attending the killing show an abandoned and malignant heart.

Although brief in its definition, it can be pretty tricky to understand the nuances of these statutes and the various criminal sentences that follow if convicted of the crime of murder.

And while the statutes may or may not seem relatively simple in their definitions, there are several different types of “murder” recognized in California. First, murder is generally classified as a state crime, meaning it is prosecuted in state court instead of federal court. This is true for California.

The key terms to understand from this definition are “unlawful killing” and “malice aforethought.” These terms are so important to understand because not all “killings” are unlawful; thus, some “killings” do not result in prosecutions or criminal convictions.

Basically, a homicide is committed when someone is killed. However, some homicides are not considered murder. For example, as discussed further below, some homicides are justified; therefore, either the prosecution can bring no charges, or no criminal convictions will be given. Murder, which is a crime, requires the killing to be unlawful and committed with malice aforethought.

We will discuss this more fully below. Briefly, malice aforethought is a technical and legal term for an intentional killing of another that was unlawful and done with a general disregard for human life.

Below we will discuss the elements of First Degree Murder, Second Degree Murder, and what facts and circumstances constitute charges of Manslaughter. We will also outline their various potential criminal sentences and the many defenses to these severe charges.

1) What Is First Degree Murder?

PC 188 defines Malice as the following:

Malice does not necessarily mean that the person had any hatred or ill-will toward their victim or victims. The person’s actions simply need to demonstrate a complete and wanton disregard for human life. They essentially commit acts that involve a high degree of probability that the result of their actions will be the death of another.

To be convicted of First Degree Murder in California, the unlawful killing must have been committed in one or more of the following ways:

Let’s look at a few examples of First Degree Murder.

2) What is Felony First Degree Murder?

Felony murder is a legal term for killing someone while you are in the process of committing a dangerous felony, such as burglary.

The law on this has recently changed.

Before 2018, you could be guilty of this even if you did not intend to kill the person while committing the dangerous felony. For example, if you intended to burglarize someone’s home and accidentally killed them in the process, you would be found guilty of Felony Murder. However, this was changed by Governor Jerry Brown on September 30, 2018, when he revised the old law.

The revision occurred through Senate Bill 1437, which states that a person can face Felony Murder charges only if the following happened:

In essence, you have to intend to kill the person while the felony is being committed; it cannot be an accident to be considered a Felony Murder. The exception is only for on-duty law enforcement officers who are killed during the felony. It should be noted that anyone convicted of this crime before 2018 can seek a different sentence based on Senate Bill 1437 if they file a petition for re-sentencing.

To be convicted of First-Degree Murder, the killing needs to occur during the commission of dangerous felonies such as:

Also certain sex crimes such as:

There are various sentences imposed for being found of First Degree murder. Typically, these carry the harshest penalties.

Generally, depending on the facts and circumstances of the particular situation, the sentence is 25 years to life in state prison.

If the crime and killing occurred as a result of a “Hate Crime,” the sentence is life without the possibility of parole. In California, Hate Crimes that result in murder happen when the killing is based on a person’s: (1) race, (2) religion, (3) gender, (4) disability, (5) sexual orientation, or (6) nationality.

In addition to the above potential sentences, there are “mitigating” and “aggravating” factors. Mitigating facts tend to lessen the sentence, such as a time being a “first-time” offense. Aggravating factors cause the penalty to be more severe.

Aggravating factors can include the following:

Capital Murder is still considered “First Degree” murder, as discussed above. However, this is a type of sentencing for First Degree murder, and it is severe.

Capital Murder can apply to many scenarios, more than 20 different situations, governed by PC 190.2. These are the type of “special circumstances” or aggravating factors, that elevates First Degree murder to a Capital Murder sentence.

Here are a few examples:

The sentence is as follows:

1. The death penalty (death by a lethal dose of gas or an intravenous injection of a lethal substance).

However, there is now a temporary moratorium on the death penalty executions when Governor Gavin Newsom changed this sentence on March 12, 2019.

2. Life in prison without the possibility of parole.

3) What Is Second Degree Murder?

Essentially, Second Degree Murder requires malice or an intention to kill. (In this regard, it is similar to First Degree Murder). However, Second Degree murder does not require that the killing be committed with premeditation or deliberation. For example, these are what many know to be “heat of the moment” type killings.

In California, these killings are ones that are not Felony First Degree Murder, or killings that result from Manslaughter.

Let’s say someone is having a party at their house, and there are about 20 people at the party.

4) What is Second Degree Felony Murder?

This is similar to First Degree Felony Murder in that a felony is involved while the killing occurs. However, there is no definitive list of these types of felonies, as there are in First Degree.

Since there is no enumerated set list, the courts go on a case-by-case basis to apply the Second Degree Felony Murder Rule.

This is typically a lesser sentence than First Degree Murder charges. Generally, these sentences carry 15 years to life in state prison. However, like First Degree Murder, “aggravating factors” can increase the defendant’s sentence.

Some include the following:

In California, you are allowed and justified to kill in certain scenarios when you reasonably believe that you or someone else is in imminent danger of (1) being killed; (2) suffering great bodily injury; or being raped, maimed, robbed, or a victim of other forcible crimes.

You have to have a “reasonable belief” as opposed to unreasonable.

An accidental killing is a legal defense.

To apply, the defendant must meet the following criteria:

You can plead “not guilty by reason of insanity” if you can pass the M’Naughten test, the legal standard for the California “insanity” defense.

To apply, the defendant must prove the killing occurred only because:

The entire case can be discussed, and murder will be excused if this standard applies.

Suppose a mother suffers from post-partum depression and deliberately crashes her car into a cement wall and kills her baby (but the mother survives). In that case, she can use her underlying psychosis to show she was “legally insane” at the time of the killing.

Law enforcement must follow proper procedures afforded to us by the United States Constitution, such as what rights we are entitled to through our “Miranda” rights, and they cannot coerce confessions.

This usually happens when police officers interrogate suspects and make threats against them or their own families or threaten the defendant with a sentence involving the death penalty.

They also will try to offer a lesser sentence in exchange for a confession. If this occurs, the court will exclude the confession. While it is illegal, unfortunately, it is more common than people think.

A police officer tells a suspect that he will get the death penalty if he does not confess to the murder. Because the suspect is scared of being sentenced to death, he confesses to the crime that he did not commit.

While California allows searches and seizures of suspects’ property, there are limits under the United States Constitution.

This is known as our “Fourth Amendment Right” against unreasonable searches and seizures.

This then could be used by the criminal defense attorney to possibly exclude that evidence of the gun ever being found into being admitted into evidence at trial.

It has been demonstrated and learned through research that a case of mistaken identity is one of the biggest causes of wrongful convictions for murder.

People often think they can identify a person’s identity, but their memory may not be as reliable as they believe; this can occur for several reasons. Some reasons are identified below:

To help combat this issue, an experienced criminal defense attorney will utilize several approaches, including demanding a live lineup. This will help determine whether the witness can accurately identify the defendant.

Also, the attorney can challenge procedures that may have been used in prior lineups or photographs to exclude the evidence. They can have an “eyewitness identification expert” testify at trial to explain how common it is for the witness to mistakenly identify the defendant, no matter how hard they try to remember accurately.

The most important aspect of this strategy is creating a reasonable doubt about the actual killer’s identity.

5) What is Third Degree Murder/or Manslaughter?

Third Degree murder does not exist in California. It exists in only a few states.

However, it is similar to Manslaughter charges. With Manslaughter, “Malice Aforethought” is not an element of the crime, as it is with Murder. Thus, it is clear that one’s state of mind at the time of the killing is vital in determining what type of charges will be filed.

While a person still kills another person willfully, deliberately, and intentionally under this scenario, the killing is committed without “premeditation.” This may seem a bit confusing. However, this is the typical “heat of the moment” scenario. Here is an example. A husband comes home and sees his wife engaged in sexual activity with another man in their bedroom. The man also happens to be his best friend, and the husband is completely shocked and upset. In the heat of the moment, he grabs his gun in his nightstand and kills his wife. This will likely be charged as Voluntary Manslaughter. This conviction can carry up to 11 years in state prison. (Usually, it is a three (3), six (6), or 11-year sentence).

Vehicular Manslaughter occurs when some is killed by another person who is driving at the time of the incident. It can be charged as either a misdemeanor or felony; it will depend on the facts and circumstances of the case. (For example, if this is a repeat offense, it will likely be charged as a felony).

If you’ve been charged with First Degree Murder or Second Degree Murder or Manslaughter in the Los Angeles area, contact us today for a free consultation. Your freedom depends on finding an experienced defense attorney immediately. The sooner you reach out, the sooner we can work on getting your case drastically reduced or dismissed entirely.

Our experienced and assiduous attorneys will be sure to fight until the end to reduce or drop your charges entirely.