What is Lack of Probable Cause in Criminal Law? 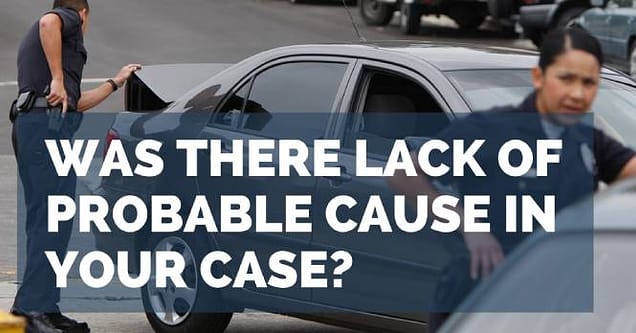 Under California law, law enforcement is required to have probable cause that someone is engaging or has engaged in criminal activity before any stop, search, or arrest is justified.

Oftentimes, authorities will stop a vehicle or search someone’s house without the required probable cause.

In these cases, an experienced criminal defense attorney will raise “lack of probable cause” as a legal defense, and all evidence obtained during the illegal stop, search, and/or arrest will not be used against the defendant.

When conducting a stop, search, or arrest, police must be able to describe detailed and specific facts on what they’re basing their suspicion of criminal activity on. Police stops, searches, and arrests can’t be based on a gut feeling, hunch, or any other vague factors.

We commonly see a Lack of Probable Cause arise in Driving Under the Influence cases in California. Law enforcement officials are constantly on the lookout for impaired drivers, especially at certain locations and during holidays, weekends, and late nights. Often, authorities may pull a driver over who they believe to be driving under the influence without the required probable cause to justify the stop.

In these instances, an experienced criminal defense attorney will challenge Probable Cause in court, and they will effectively show the lack of probable cause and argue to have the evidence against their client thrown out.

Probable Cause in DUI Cases

In order to pull over a driver for DUI, police, sheriff’s deputies, or California Highway Patrol (CHP) officers must have “reasonable suspicion” that the driver is committing or has committed a crime.

The United States Constitution’s Fourth Amendment bans unreasonable searches and seizures, meaning officers cannot simply pull drivers over for no reason. Instead, they must point to specific facts that caused them to suspect the driver was impaired or committing another crime.

It’s important to note that this does not mean the officer must specifically suspect the driver is under the influence. Any other potential traffic violation is fair game, such as driving with no headlights, a broken tail light, or swerving in and out of traffic. As long as the officer can articulate some reason for pulling the driver over, probable cause/reasonable suspicion will be justified.

There is one exception to this rule: DUI sobriety checkpoints.

For these checkpoints, police are not required to have reasonable suspicion of a crime to stop drivers.

When Can Police Start a DUI Investigation?

As we’ve mentioned, first and foremost, the officer needs “reasonable suspicion” to start the DUI investigation — or the next step after a sobriety checkpoint or traffic stop.

The investigation starts as soon as an officer believes a driver is under the influence and typically involves:

In some California counties, officers are also allowed to swab drivers’ cheeks if they suspect they are under the influence of marijuana.

It’s important to note that drivers are not required to take the FST or PAS tests or submit to the cheek swab if these tests are requested before they’ve been arrested. What’s more, as the DUI stop progresses, the requirement for justification gets higher.

Although it’s fairly easy for an officer to satisfy the reasonable suspicion requirement for a traffic stop as a simple traffic violation satisfies the requirement, the level of cause necessary to detain and investigate a motorist is much higher.

What Probable Cause is Necessary for a DUI Arrest?

Because an arrest is considered an invasion of privacy, higher justification is needed to support an arrest than what’s needed for a mere traffic stop or investigation. As we mentioned, the officer must point to specific facts that show why they believe the driver is under the influence, not gut feelings or hunches. Facts that can constitute probable cause include:

Have you recently been ticketed or arrested by police? Seppi Esfandi can help. He is an expert criminal defense attorney with more than 20 years of experience defending his clients from a broad spectrum of criminal charges. The sooner you call us, the higher your chances are to win your case.