What are the ‘Open Carry’ Gun Laws in California? 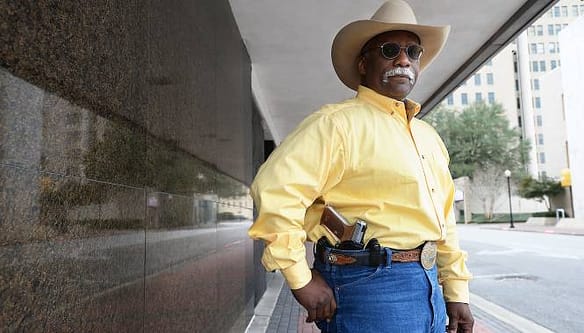 Penal Code 26350 is a law that prohibits a person from openly carrying an unloaded handgun in a public place or in a vehicle.

“A person is guilty of openly carrying an unloaded handgun when that person carries an exposed and unloaded handgun inside or on a vehicle, whether or not on his or her person, while in …a public place…”

A violation of this law is a misdemeanor and punished by a maximum of one year in the county jail.

What is a public place?

This law specific prohibits open carry in a vehicle or public place, and “public place” is not defined, but it probably includes anywhere that is accessible to the public such as private property open to the public. Since “public place” is not defined in the statute, it leaves space for a good defense attorney to argue that places such as a friend’s house, a gathering, a private driveway, or the area where the defendant was found with the gun is not a “public space.”

Are there other ways of getting my case dismissed?

Yes, under the fourth amendment, the police always need some justification to search you with a gun. That justification can be a search warrant, but absence a search warrant the police need probably cause to believe you committed a violation to pull you over or to search your belongings. If they do not have sufficient probably cause, searching your belongings for a gun is illegal. An illegal search means that evidence found as a result of that search, such as the gun, must be thrown out. (See fruit of the poisonous tree doctrine). If the gun is not allowed into evidence, your case will be DISMISSED.

Upon a close examination of this law, a few questions naturally arise about avoiding a violation. For instance, this statute makes reference to an “unloaded handgun.” Can I keep a loaded handgun in a public place? The answer is an unqualified “NO” because then you be in violation of California Penal Code 25850 PC which makes it a crime to carry a loaded firearm in a public place, on a public street, or in a motor vehicle. This offense is generally treated as a misdemeanor punishable by up to one year in county jail.

So, the next question you may ask is: this law refers to openly carrying “an exposed” handgun, so can I hide the gun, let’s say under my jacket, and take it into a public place? The answer to this is also an unqualified “NO” because then you would be in violation of California Penal Code 25400 PC, which makes it a crime to carry a concealed firearm on your person or in a vehicle. As a misdemeanor, the charge carries a penalty of up to 1 year in jail. If charged as a felony, the sentence is up to 3 years in jail.

Related Crime- Felony in Possession of a Firearm PC 29800 PC

Under Penal Code 29800 PC, a convicted felon cannot possess a firearm. If you have a felony and are caught with a firearm, you can be charged with this felony.

Can I Ever Have a Gun outside my home without being charged with a crime?

Yes, there’s really only one way to possess a gun without getting arrested. The one way to do it is to is if the firearm is:

If you are under investigation in the Los Angeles area for any California gun law, contact us today for a free consultation. Your freedom depends on finding an experienced defense attorney immediately.

The sooner you reach out, the sooner we can work on your legal defense which may involve avoiding an arrest or charges being filed. Assuming charges have already been filed, an experienced defense attorney can potentially have your case drastically reduced or dismissed entirely.