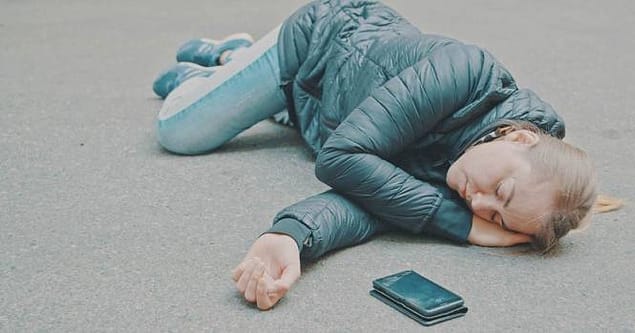 As you’re probably aware, the U.S. Constitution’s Eighth Amendment prohibits cruel and unusual punishment. In Automatism: The Unconsciousness Defense to a Criminal Action, Patricia E. Gould asserts that the “American judicial system must provide for defendants whose cases are inappropriate for the sane-guilty/insane-not guilty category,” that “because the penalties do not serve any penal goal, denial of the automatism defense constitutes cruel and unusual punishment,” and that “because an individual who acts automatically does so without a guilty mind or a guilty act…the eighth amendment prohibits the punishment of the automatistic [sic] defendant as cruel and unusual.”

Under California law [Penal Code 26], a person cannot be punished for a crime he or she did not consciously (with awareness) commit. If the defense is able to establish reasonable doubt about a defendant’s consciousness, the burden of proving consciousness beyond a reasonable doubt shifts to the prosecution. To prove that you are guilty of a crime, a prosecutor must establish that not only did you commit the criminal act, but that (at least to some degree) you knew it was a criminal act and that you intended to commit it.

With respect to the legality or illegality of one’s actions, the term “automatism’ is frequently used interchangeably with “unconsciousness” to describe “action or conduct occurring without will, purpose, or reasoned intention…the physical and mental state of a person who, though capable of action, is not conscious of his or her actions.” [Black’s Law]

Unconscious behavior can be symptomatic of a chronic medical condition. If you are facing criminal charges and have a psychiatric history demonstrating that you have repeatedly exhibited symptoms of mental illness that cause you to violently act out without any awareness of what you are doing, it’s entirely possible you will be found not guilty by reason of insanity. In order to be found not guilty by reason of insanity, the defendant must prove that he/she/they were “incapable of knowing or understanding the nature and quality of his or her act and of distinguishing right from wrong at the time of the commission of the offense.” [Penal Code 25] If you are found not guilty of committing a criminal act by reason of insanity, you will be sentenced to spend time in a mental institution rather than in a jail or prison.

However, a person does not have to be insane to be subject to automatism. Gould explains that “Automatism occurs in sane people, arises from some physical cause, lasts only a very short time, and leaves its victim temporarily unable to control his behavior. To the observer, the automatistic individual looks perfectly normal; however, during automatic behavior the individual is totally unaware of his actions. If asked to determine whether the act committed during automatism was right or wrong, he would be able to do so. As soon as this state recedes, the individual is again aware of his actions but may not be able to recall those performed while in the automatic state.”

Sane Automatism comes as a surprise, is the result of an external factor (such as getting hit on the head or attacked by a flock of angry birds), and it is a temporary condition. Sane automatism (or unconsciousness) can occur during sleepwalking or sleep terrors, hypoglycemic or hyperglycemic attacks, and epileptic seizures. It can manifest as convulsive reactions to bad—or newly changed—medications or as a result of PTSD triggers. George WhiteCross Paton describes sane automatism as an “involuntary action performed in a state of unconsciousness not amounting to insanity. Theoretically the defense is that no act in the legal sense took place at all—the plea is that there was no volition or psychic awareness.” [Textbook of Jurisprudence] If the defense in a criminal case proves sane automatism, the result must be an automatic acquittal.

In order for an unconsciousness defense to be successful, the condition causing the automatic behavior cannot have been willfully induced. Getting blackout drunk and not having a clue about what you (outrageously) did the night before is not considered involuntary. Having voluntarily taken illegal drugs that unexpectedly resulted in your having spasms or convulsions that, in turn, resulted in violence against another would also likely undermine a sane automatism defense.

Similarly, if you are aware that you already have a medical condition that might cause you to have seizures, spasms, or convulsions and you decide to drive, you could be held responsible for any unfortunate results of your impaired driving because, based on your knowledge of your medical condition, you, presumably, ought to have known better than to do so.

Military veterans and rape survivors suffering from Post Traumatic Stress Disorder (PTSD) have relied upon the defense of unconsciousness. So have professional football players and boxers who, having endured repeated Traumatic Brain Injuries (TBI), could inadvertently be violent victims of automatism.

The first successful use of unconsciousness as a criminal defense happened in Boston in 1846, when Albert Tirrell was acquitted of slashing his sex worker girlfriend to death at the brothel, while in a sleepwalking induced trance. Tirrell, without the enhancement of any medically scientific corroboration, was convincingly defended as a chronic sleepwalker. Now, almost two hundred years later, advanced Neuroscience expert witness testimony is often used, by both prosecution and defense attorneys, to shed directive light on aspects of a defendant’s (conscious or unconscious, internally caused or externally caused) mental state. Nevertheless, interpretation of that scientific information and the judicial verdicts based upon it has not been at all consistent. The results of employing unconsciousness as a criminal defense have varied widely, even in California and Illinois—the first states to officially admit Automatism or Unconsciousness as a defense.

If you, or a loved one, need to learn more about appropriate available defenses, including Unconsciousness/Automatism, please call for a free consultation.