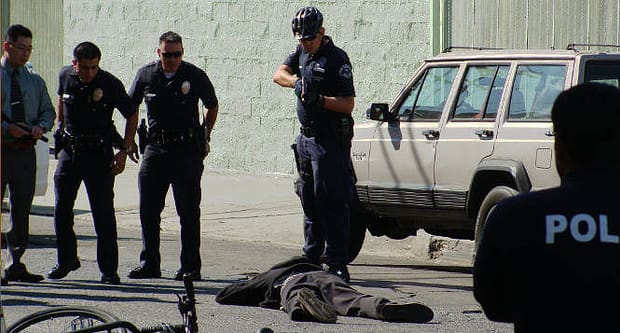 Epidemic: Unjustified Police Shootings, in 2017, 987 humans have been shot and killed by police in the US. That’s 24 more fatal shootings than in 2016, and 8 less than 2015. Countless more animals are killed every year. So many, in fact that it has become an epidemic.

“Mental illness” was ruled a critical factor in one quarter of the 987 deaths caused by Unjustified police shootings in 2017.

Ironically, the “mental illness” was ruled against the victim who was shot and not the officer in every single case. Shouldn’t a trigger-happy cop be evaluated for mental health as well? Yes, they should.

In a shockingly large percentage of the Unjustified police shootings, a multitude of tactical errors were made leading up to the shooting. In the most flagrant cases, the police actually shot and killed the person who called them in the first place!

This brings into question whether the shooting could have been avoided altogether using different tactics. Police should be trained to assess whether a citizen should be deemed a threat more critically.

The use of deadly force should only be used when the police themselves are being directly threatened with deadly force. Otherwise, a de-escalation tactic would better serve the community.

Unfortunately, most law enforcement agencies do not believe de-escalation training is necessary for their officers.

Clearly, there needs to be a grassroots community movement pleading for the local law enforcement agencies to use less deadly force and train for de-escalation when they arrive at the scene of an alleged crime.

No Accountability to Unjustified Police Shootings

To make matters worse, in an overwhelmingly large number of cases, the shooting officer under investigation ends up being found not guilty.

Less than one percent of officers suspected of an unjustified shooting end up being charged, and the number of convictions in those cases equals zero.

This lack of conviction further compounds what is quickly becoming an epidemic in America. Many of the highly publicized cases end up with protests and even riots in the streets by communities fed up with the problem.

In Los Angeles steps are being taken. Los Angeles Police Commission appears to be judging officers’ decisions to use deadly force more critically.

In Los Angeles approximately one person is shot by the police every four days. That number is fairly low compared to other metropolitan cities like Chicago, but that hasn’t stopped the Police Commission from instating a five-member civilian panel to oversee the LAPD’s behavior in cases where police shootings occur.

Most officers go through their entire career without ever firing a shot in the line of duty. However, there are a select few that have been labelled “frequent shooters”. Even though these officers make up 1% of the force, they’re involved in 20% of the shootings. This is the reason for the watchdog group.

Seppi Esfandi is an Expert Criminal Defense Attorney who has over 17 years of practice defending a variety of criminal cases.